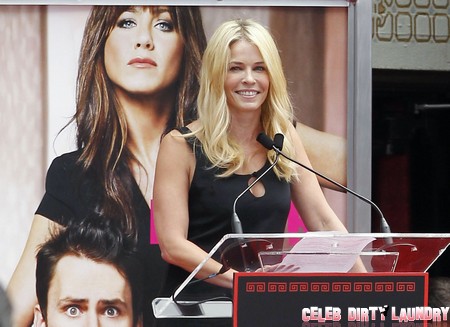 Jennifer Aniston is finally engaged to Justin Theorux and now people await the wedding announcement.  We know Jennifer is at last engaged because she made it ‘official’ and Justin didn’t deny it.  Jennifer has a history of failure with men – they leave her because they don’t like being with her.  Brad Pitt admitted that his sterile life with phoney Jennifer drove him to drugs and infidelity, an affair with Angelina Jolie.  Gerald Butler, another one of Jen’s victims, enjoyed a private cruise with Poison Ivy and promptly dumped her. In any case, we are not here to make Jen look bad just because Hollywood’s finest can’t stand being with her.  We are here to let you know Jen’s plans for talking about her anticipated wedding to Justin.

Jennifer has a tight relationship with take-down artist Chelsea Handler and it is to her pal, on National TV of course, that Jen will reveal details about her upcoming marriage.  Chelsea has a successful show on late night TV, Chelsea Lately, and according to Louise A. Barile in OK! USA (The Magazine The Stars Trust), Print Edition, September 17th, Jen will be Chelsea’s first guest when she starts filming from her new studio in NBC’s back lot.

It’s no secret that Jen and Chelsea are tight, but the insider says Jen was frank with her about what she will and will not say on the air.

“Jen loves Chelsea’s usual raunchy interview style, but only when uses it on other people!” says the insider.  “She thinks Chelsea sometimes takes things way too far, especially when she gets into people’s sex lives, so Jen and Chelsea sat down to carve out questions that Jen felt uncomfortable answering. It was a big negotiation. They planned how the interview will go, and Chelsea has agreed to not get too intimate.”

“Originally, Chelsea wanted to talk about how Justin didn’t like her at first,” the pal continues. “But Jen said that’s off-limits, as well as any mention of Brad Pitt and Angelina Jolie.”

Of course at first Justin didn’t like Jen.  Who does?  But when quick-witted Justin (he graduated from the highly ranked Bennington College) realized what being Jen’s beau could do for his stagnant career he suddenly warmed up to her.  Now Justin is a much-in-demand super-highly paid actor and he’s in love.  Is he in love with Jennifer or the greatly enhanced career prospects he enjoys as ‘her man?’  Calls to Justin’s reps were not returned.