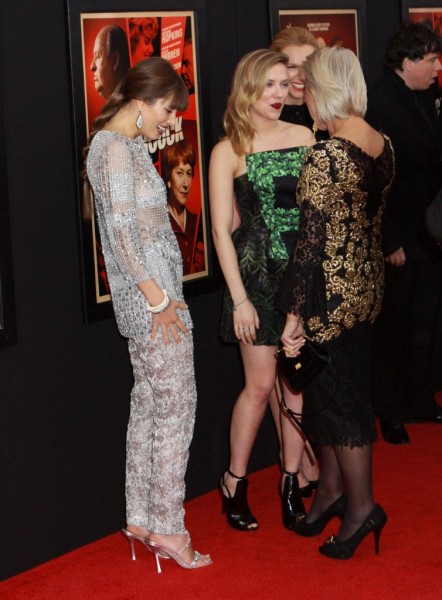 If tabloid gossip stories like this tell us anything it’s that Jessica Biel is BORING and considered one of the most insecure women in the world. Last month it was Britney Spears. The month after that it was Cameron Diaz. Now, Jessica Biel is telling Justin Timberlake to stay away from former co-star and (maybe) one-time love interest, Scarlett Johansson.

Star magazine is claiming that Jessica and Scarlett are playing nice for the cameras during their Hitchcock promotions but the second they’re alone Scarlett continually eggs on Jessica’s insecurities. A source told the magazine, “Scarlett told Jessica that she landed a really great guy, but then baited Jessica by saying, ‘Keep an eye on Justin; he’s trouble!’”

Apparently Jessica’s shame knew no bounds and she even tried to get the details on Scarlett’s rumored fling with Justin when they filmed his “What Goes Around” video a few years back but Scarlett just brushed her off and told her to stop being paranoid.

Do I think Jessica Biel has those thoughts in her head? Definitely. Did she actually confront Scarlett? Hells no. Diamond rings do tend to make timid pushovers a bit more confident… but I can’t see this going down. If anything Scarlett was probably just acting sympathetic. I heard she could have had Justin if she wanted him but decided against it. Did she know he wasn’t ready to reform? Does everyone know that except Jessica?

As I always say, gossip isn’t about the news. It’s about the message. And the message around Jessica Biel is that she’s an anxious, unsure new bride who might have the man but doesn’t feel like she really has the man, you know? It doesn’t matter if it’s not true. She’s basically a married Jennifer Aniston.

Are Jessica Biel and Scarlett Johansson feuding over Justin Timberlake? Is Jessica Biel insecure or does she just have a bad rap because of all of Justin’s rumored infidelities?