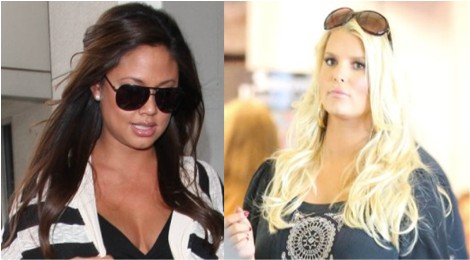 The battle rages on between Jessica Simpson and Vanessa Minnillo Lachey but this time they’re not competing for an eternal place in Nick Lachey’s heart. It’s the battle of the bulge and the reality stars are at it to see who can drop the baby weight the fastest. In that sentence do you think Jessica would be more annoyed about the weight discussion or the fact that I called her a reality star?

Anyway, besides the fact that Jessica hasn’t been technically eating for two since May, new mom Vanessa is determined to get into her skinny jeans before her and show Nick how lucky he is that Jessica dumped him all those years ago.

A source told the National Enquirer, “Jessica is still struggling to drop her baby weight, and Vanessa has vowed to lose the extra pounds before she does. Vanessa would never ad­mit publicly that she wants to beat Jess in a weight-loss bat­tle, but it’s her secret goal. Within the next few weeks, Vanessa plans to start working out with a trainer four times a week and do cardio and light weight training the other days. She’s promised Nick that she’d be pushing a stroller in her smoking-hot body by Thanksgiving. Vanessa is very competi­tive. Not only does she want Nick to know he made the right choice when he mar­ried her, but she knows it will drive Jessica insane to see her flaunting her sexy post-baby body.”

I don’t care if this is the Enquirer, stories like this make my morning because it shows that I’m not the only one who thinks these women side eye each other all day long. What better revenge is there than looking better than you man’s ex? I don’t care if it’s petty! It’s the truth. Get over it! But, honestly, this really isn’t a competition, right? I mean Vanessa could sit on her ass and eat bon bons all day long for the next two months like Peggy Bundy and still miraculously look better than Jessica Simpson. And that’s even if Jessica manages to get that lap band surgery. So my money’s clearly on Vanessa. She might be Jessica 2.0. She might be a reality star. She might just be a host for Wipeout but she isn’t lazy. She’s a worker. Jessica – not so much. Do you think Jessica will use Vanessa as motivation? If $4 million from Weight Watchers couldn’t do it, would her ex-husband’s hot wife? Do you think Vanessa watches Jessica’s Weight Watchers commercial on repeat while she’s running on the treadmill? I would. I haven’t seen that commercial in awhile. I wonder if WW pulled it because it’s embarrassing.