Jessica Simpson’s Eating For Four Again, Back To Sodas And Fried Foods 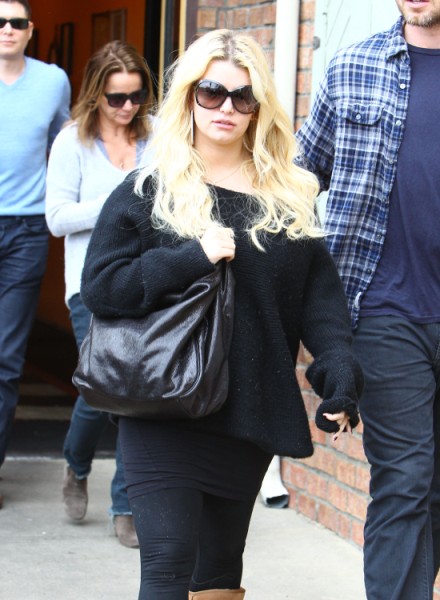 Jessica Simpson has yet to confirm she’s pregnant with her second child but she isn’t fooling anyone with her black clothes and huge bag. She reminds me of the kid in Big Daddy who thought he was invisible when he wore sunglasses. Jessica Simpson’s eating habits are giving her away to her friends as well. Apparently she’s back on the sauce – the barbecue sauce – and all about fried foods and sodas again because she refuses to believe pregnancy isn’t just nine months of cheat days.

According to Us Weekly:

“Jessica ordered a grilled cheese sandwich with onion rings,” a fellow diner at the Polo Lounge in Beverly Hills tells Us Weekly. As her friends toasted Cobb with cocktails, the mom to Maxwell, 7 months — who has yet to confirm her pregnancy — waved off her usual white sangria.

“Guess what?” she told her server, with a smile. “I’m drinking ginger ale!”

In anticipation of the baby’s arrival, Simpson, 32, and fiance Eric Johnson, 33, are in nesting mode: A source says they just made an offer on a house in L.A.’s luxe Hidden Hills!

What was the point of the whole Weight Watchers thing? Wasn’t she, through the experience, supposed to show that she can eat healthy, good tasting things in moderation? Isn’t that the message she was shelling for $4 million? Yes ladies you can have your small piece of cake and eat it too as long as it isn’t all the time and you work out a little on the side? Is there anyone out there who still believes she was a great spokesperson and deserved that money? I just don’t  understand her! You’d think she’d try harder this time around and stay away from the junk food. She knows how hard it sucks to get rid of it! But apparently Jessica Simpson abhors lessons just as much as she does salads.

What do you think of the pics? Is Jessica Simpson’s diet dunzo for the next six months? Take a look at her lips. Are you seeing something weird there? They look odd to me.