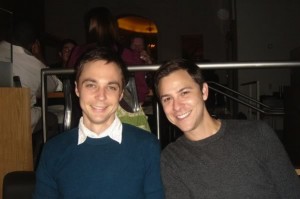 Jim Parson’s boyfriend Todd Spiewak is about to become famous, even though he probably doesn’t want to. Since the Big Bang Theory actor made the official announcement that he is in fact, gay, people have been searching trying to find out who Parson’s partner, gay lover and friend is, the guy who Jim has been hiding from the world for ten years. Rumors were swirling a few years ago back when the National Enquirer’s stories were questionable, but it seems as if they got this one right. Parsons is in fact gay, however this isn’t new news to the gay community.

In 2010, the Enquirer said that on Emmy’s night when Parsons won an Emmy, he thanked his (then-rumored) man AND reportedly proposed to him! Check out the excerpt:

Jim Parsons walked off with two fantastic prizes the very same night – an Emmy and a husband! The 37-year-old star celebrated his victory by proposing to longtime boyfriend Todd Spiewak – and now they are planning a Christmastime trip to Massachusetts where they’ll tie the knot, say insiders.

That same year, Queerty reported that the couple were engaged and it wasn’t exactly a secret in the gay community.

And while we don’t really know for sure if they are secretly married, I’m pretty sure they may feel a bit of relief that they no longer have to “hide” anymore.

As for a Todd Spiewak biography? We don’t know much. We found a profile on Facebook (but it has since been taken down) that looks like his, however, it is rarely updated. We also found a Livejournal blog that appears to belong to both Todd and Jim or a fan of the gay couple. You can check that out here. There are tons of photos that have been posted of the two together there including a few from a basketball game in March of 2012.

Congratulations to Jim Parsons and his partner! Here’s to a long-lasting relationship!