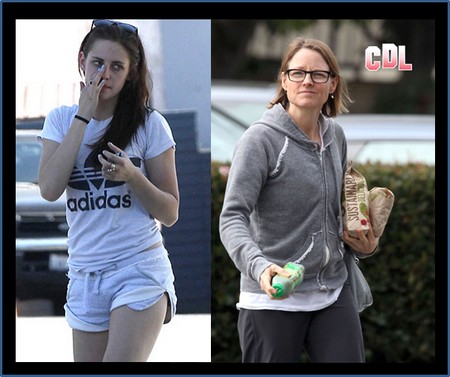 Kristen Stewart may not after all have all of Hollywood despising her. It seems that she has one person out there keen to lend a show of support –  and it’s her old pal Jodie Foster.

Kristen has understandably found herself to be hated by all after it was discovered that she did in fact cheat on her boyfriend of four years, Robert Pattinson. The actress was caught red-handed with her director from Snow White and the Huntsman, Rupert Sanders, via pictures made exclusive by Us Magazine.

While KStew issued a public statement of apology, Rob doesn’t seem to be going for it. Twi-Hards around the world have been left devastated, with Kristen looking more and more like the devil re-incarnate as time goes on.

Luckily, she has found a friend in Jodie, whom she worked with years ago on the film Panic Room. According to Radaronline, Jodie contacted Kristen Stewart to offer her support through the cheating scandal.

“As soon as she heard the news, Jodie contacted Kristen to offer her support, they have been close friends since they starred opposite each other in the 2002 movie Panic Room, and Jodie is a mother-like figure to her.  Jodie told Kristen to take no notice of the media bashing and said if she wanted to cry her heart out to her she’s always available.

“Jodie loved Rob and is disappointed with Kristen for cheating on him. However, she knows at 22, she’s still very young and unfortunately people make mistakes in life. She thinks Kristen will learn from this and will only grow into a more mature person because of it.   “She certainly has no intention of turning her back on Kristen during such a difficult period in her life.”

Well, all I can say is at least she’s got someone on her side.  I’m still devastated and don’t know if I can forgive her. It’s going to take a long, long time to heal this kids’ wounds!