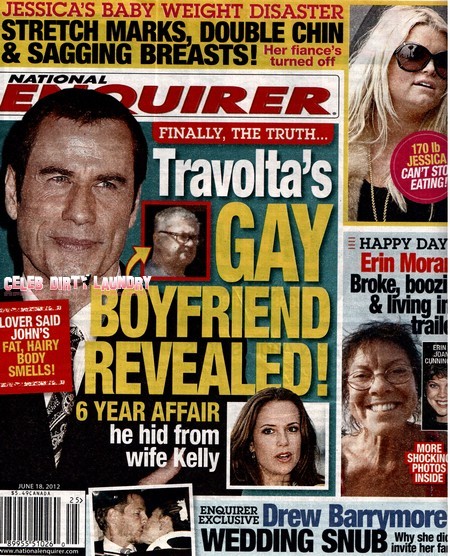 John Travolta’s gay lover of 6 years Doug Gotterba has come out and exposed his former boyfriend and employer.  John’s gay sex scandal has come full circle from rumor to fact – John Travolta is gay and Doug has confessed to 6-year sexual affair with the actor.  Doug admitted his secret affair with John to a former secretary of the actor’s, Joan Edwards who came forward to rat out John.

Joan said: ‘I worked for John Travolta from 1978 through 1994,‘ as she spoke to the National Enquirer.  ‘I did everything for him, including take care of his personal and professional schedules.  Of course, I knew he was gay.  It never bothered me.‘

Joan adds: ‘Doug told me that John was gay and they had sexual relations.‘

Doug has allegedly revealed intimate details of his romance with John to another male lover, Robert Britz.  Britz told the Enquirer: ‘Doug told me right at the beginning of our relationship that he’d had a homosexual relationship with John Travolta in the 1980’s.’

The National Enquirer Print Edition, June 18th, has many more details about this story including how John hid his gay affair with Doug from Kelly Preston.  We also learn that John’s lover said that his ‘fat, hairy body smells.’  Altogether way too much info!

You can read all about this and other hot gossip in the current edition of The Enquirer – I did!