Johnny Depp In Deep Legal Trouble: Sued After His Bodyguards Tackle A Woman 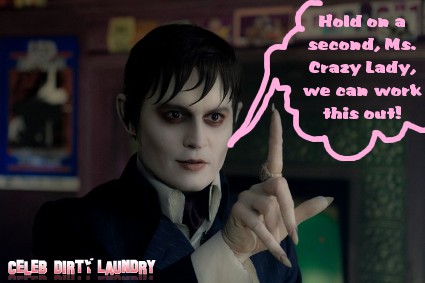 Johnny Depp is the most recent victim of the law. The actor is being sued by a 52-year-old woman who’s claiming that Depp’s body guards, according to TMZ, “roughed up and humiliated her” while at a concert back in December.

The woman, in her lawsuit filed with the L.A. County Superior Court, says that she was simply trying to get to her VIP seat at an Iggy Pop concert when Depp’s henchman — apparently Evil henchman — went totally cra-cra-crazy. They allegedly grabbed her body, threw handcuffs across her wrists, and then proceeded to drag her across the ground, exposing her buttocks for everyone to see.

According to our sources, this woman, who is supposedly a a professor of medicine at UC Irvine,  suffered a range of injuries: dislocated left elbow, bleeding, swelling, bruising, and possibly broken bones.

The woman is suing for unspecified damages.

What do you think of this latest lawsuit? Celebs are getting sued left and right, and it’s no surprise the lawsuits we hear about are those involving A-listers. Because that’s where the money’s at! If you’re going to sue somebody might as well throw some alleged charges on somebody with the cash-money-dollars, right?

Chances are this lawsuit won’t go anywhere, but CDL will make sure to keep you updated on any new developments.

Whose side are you on?