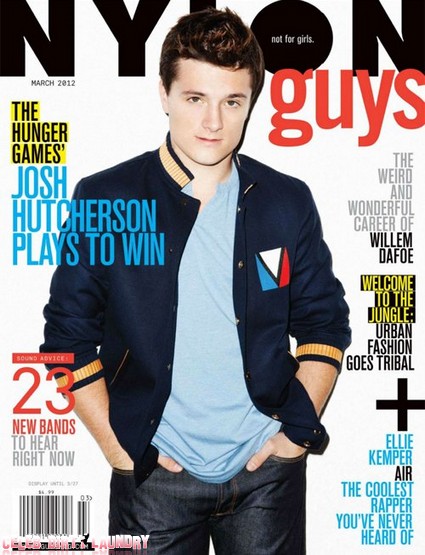 Josh Hutcherson is everywhere at the moment. He’s Hollywood hot property. That’s because he’s the star of one of the most anticipated films of 2012. Josh plays Peeta Mellark opposite Jennifer Lawrence as Katniss Everdeen in The Hunger Games.

So because the movie opens next month – yes, it’s getting closer to March 23 – he’s popping up all over the place. He’s now got the February/March issue of Nylon Guys covered. Inside the 19 year old talks about identifying with his character in the big screen adaptation of the much loved book by Suzanne Collins. There’s also some nice eye candy as well.

So did he read the Hunger Games books before signing on for the role? ‘I tore through them in like five days – I loved it. And I loved Peeta. It was scary to me how much I connected with Peeta. He had this belief that no matter what circumstances you’re put into, you maintain being true to yourself, and that’s one of my golden morals. In this business especially, you have a lot of opportunities to be fake. When Peeta goes into the games, he’s not going to let it change who he is. And I’m going into the game of the acting world, and I’m not going to let it change who I am.’

There’s major buzz about this movie. It’s being called the new Twilight. The similarities are there and with three books in the series we’re already guaranteed two sequels. Is Josh the new Rob Pattinson? We’ll find out on March 23!