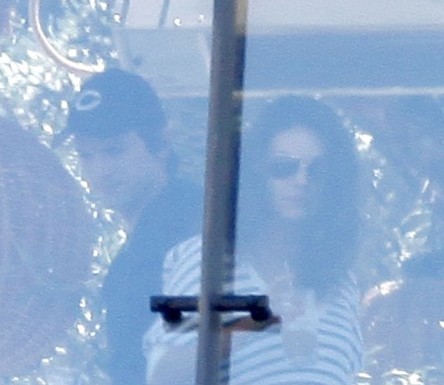 Mila Kunis might have called recent allegations of a romance with her That 70’s Show co-star Ashton Kutcher “absurd”, but the proof is in the pictures and the two were caught cuddling over lunch this weekend.

Mila and Ashton met a friend at Soho House in West Hollywood and Mila couldn’t help draping her arm around her rumored beau throughout the meal. At one time, her hand seemed to be massaging his neck and hair. Are these the types of things you do with just a friend?

Though the couple continue to deny their burgeoning romance, someone close to the pair told Us Weekly they are definitely together, but aren’t tying each other down. “They’re not exclusive, but they are hanging out and seeing where it’s going,” a source told the magazine.

Mila and Ashton are doing a horrible job staying incognito. They were caught zipping around on Ashton’s motorcycle on June 17; went out for dinner several times in the past few months and took a three-day road trip in April. Sure, they could be allowing each other to see other people – if they ever left each other’s side!

Ugh, I’m not an Ashton fan so I’m not behind this. I can only hope it’s a booty call on Mila’s part. Ashton may be a smug, arrogant douche, but he is pretty. Sometimes a girl just wants to be around pretty. I can handle that. But she dated Macaulay Culkin for six years so her standards have to be high for the long-term boyfriends. Did you know Culkin just threw a birthday party for dinosaurs? I’m not kidding you! That  kid is awesome. So the only way I can wrap my head around the fact that Mila hooked up with Justin Timberlake, and now Ashton, is that she wants to explore; she wants to have sex with conventionally hot dudes. Hopefully, when she realizes that the only thing that made Ashton interesting was Demi Moore, she’ll recognize her own worth and go back to guys with substance.

Don’t you agree that Mila is just way too cool for Ashton? Do you think she’s just playing around until she finds her perfect guy?