Justin Bieber And Selena Gomez Make Each Other Jealous, Go To Bed With Other People 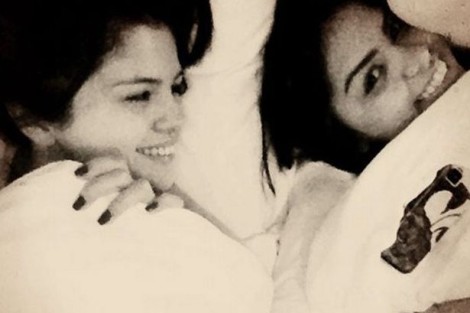 And let the games begin! The world is reacting in a crazy way to the Justin Bieber and Selena Gomez split and now the couple is getting into the spirit by simultaneously proving to everyone they can function without each other AND make each other jealous at the same time. God, I miss high school!

Last night Selena posted a pic on Twitter of her and a friend snuggling up in bed with the caption, “We’re back NY :)”. Before you freak out, she was sleeping with a girlfriend of hers. I have no idea who it was but they seem happy for the cameras which is all that really matters, right?

But Justin had his own little pre-sleep announcement. He apparently slept alone (and not with poor Barbara Palvin who’s getting Twitter punched every two seconds) and posted to Twitter, “Focused on the positive. 30MillionBeliebers with me. Im never leaving u because u r always there 4 me. love u. Night.”

So Justin has his fans to get him through this trying time. How sweet!

It’s like I said before. This is nothing. These two are going to play out some major animosity on social media. Remember when Britney Spears and Justin Timberlake had a lame ass dance off after they saw each other in a club after they broke up? Ya, this is basically the same thing only thumbs don’t get as tired as feet when all they’re doing is throwing shade via text. This break up will be a marathon, not a sprint, and we’ve only just begun. Get ready for many more graphic pics of supermodels, some new boyfriend hints and a whole lot of shit stirring. It’s going to be so much fun! But the best thing that came out of the demise of Britney and Justin was his Cry Me A River. I actually became a Justin fan with that song. Who will strike first with the break up ballad – Justin or Selena? My money’s on Bieber.

Do you believe the young couple is doing all this social media to make each other jealous? Justin Bieber and Selena Gomez appear to be doing all right but is this just the calm before the storm?