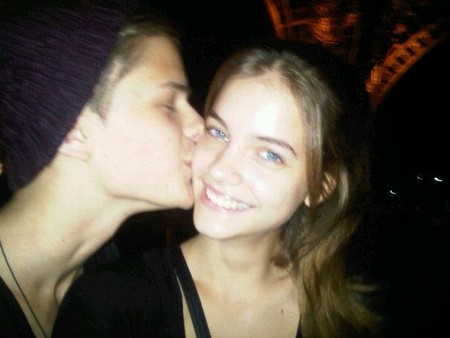 Did Justin Bieber jeopardize his relationship with Selena Gomez for a supermodel that already has a boyfriend and has no intention of breaking up with that boyfriend to be with the Biebs? Looks like it!

Victoria’s Secret model Barbara Palvin, seemingly the catalyst for the break-up of Bieber and Gomez, is claiming she’s actually  madly in love with her boyfriend of some years, fellow Hungarian Kristof Somfai.

When the seemingly perfect courtship of the young Hollywood couple crashed and burned (Bieber rented out L.A.’s Staple Center to watch the Titanic movie with Gomez…talk about a fairytale courtship) fans who were invested needed a scapegoat to vent their frustration on.  Unfortunately for sexy Palvin, she fit the bill, so when the nasty, threatening tweets started filling her Twitter page, Palvin tried to shut them down with a reply tweet of her own:

“hey everyone. please calm down. he is all yours!! :) please :)” @BarbaraPalvin

Wow…isn’t it crazy that Palvin had to defend herself to pre-pubescent and adolescent girls just because she might or might not have caused Bieber to think twice about being with Gomez? Those Bieber fans are crazy serious! In fact, that first reply didn’t work, so Palvin had to really elaborate and defend herself:

“last time im saying it. please calm down.there is nothing going on w him.i met him and did a pic w him. wouldnt u do the same?” @BarbaraPalvin

Which is abosolutely true. Those Bieber girls would’ve stabbed their mothers in their right eyes if given even half a chance to meet their idol. Even grown-ass celebrity women have clamored to have their picture taken with the Biebster, including Rihanna, Kim Kardashian and Beyonce, does that mean they’re trying to steal him away from Gomez? Don’t think so.

Looks like Palvin is going to have a battle on her hands for quite some time, or at least until we find out what’s going on with the Biebomez relationship. Apparently, they’re trying to make it work. According to sources, Gomez and Bieber were recently spotted in NYC at the same hotel around the same time, so who knows? Maybe those crazy kids will be back together before the sun rises tomorrow.

And a little tidbit from me to you…Palvin’s boyfriend, Somfai, has a passing resemblance to Bieber. Looking at the pictures they’ve both posted to their Facebook and Twitter pages, from certain angles, Somfai is a dead ringer. It’s actually a little freaky and I think it’s safe to say that Palvin have a type. So, if she doesn’t get the Biebs, at least she has a guy who looks exactly like him.

Well, what do you guys think? Should Gomez take Bieber back now that Palvin seems to be out of the picture? Or can she no longer trust the Biebs and call the whole relationship off and move on?