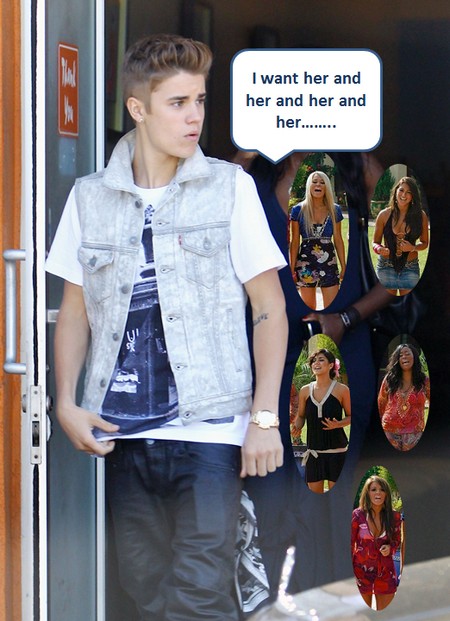 Justin Bieber and Selena Gomez are ripping apart at the seams like an overweight woman who wants to look like Lisa Rinna. Justin has been lavishing Selena with gifts, rented out the LA Staples Centre for a private screening of Titanic and took her on a private helicopter tour of Toronto.

Us Weekly reports of a friend that says, “They fight and make up all the time. Justin love Selena, but he’s starting to feel antsy. He’s in his prime and can get any girl he wants. He has definitely thought of being free.” Justin and Selena have been suffering through scheduling difficulties and haven’t had as much time to see one another.

The friend continues, “He feels he should be tapping all the girls that come around. It’s hard”. At the lack of us going all Freudian slip on you, Selena has allegedly broken plans for the two to go to Mexico, six times.  “Selena’s schedule is crazy and has become a source of contention. She has broken big plans.”

Justin tried to initiate a split in mid-May, but Selena freaked out like a suicidal woman at a “Positivity Makes the World Go Round” conference. The Biebs apologized and they got back together again.

The MuchMusic Awards in June turned into Justin Bieber’s worst nightmare, as he had a mini-breakdown behind the scenes. He cried like the overweight Lisa Rinna wannabe when she was told her face was melting. The friend says, “Justin was not in a good way. He was upset and crying, saying the relationship was over.”

They were found cuddling in July in Los Angeles and the source says, “They are kids! Of course they can fight. They can both be dramatic. Justin is still crazy about her and knows how lucky he is to have her.”