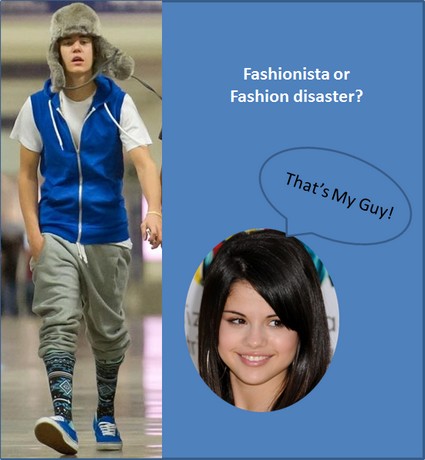 Justin Bieber is the hottest little pop star in the world, and probably the cutest, but that didn’t save his butt from a major fashion disaster. Justin was dressed up in such a crazy outfit that people who saw him were actually shocked. As he caught a flight leaving Los Angeles the teen idol appeared to have been dressed by a madman… or maybe two!

The Sun described the Bieb’s getup: Aside from the unnecessary ushanka in the mild California climate, the singer also tucked his tracksuit bottoms into the tops of his long patterned socks.

At odds with Justin’s head-warming Russian hat was his T-shirt/sleeveless hoodie combo.  It’s not known whether the Baby star’s clobber was for comedy effect, but even the most devout Beliebers will surely shun this look.

The Sun also suggested that the unusual clothing choice could have been Justin’s way of showing he has a sense of humor – after Ricky Gervis ridiculed him at the Golden Globes.

Gervias made fun of Justin by suggesting that he was not man enough to have gotten Mariah Yeater pregnant.  Gervais said: “Justin Bieber nearly had to take a paternity test. What a waste of a test that would have been.  No, he’s not the father. The only way that he could have impregnated a girl was if he borrowed one of Martha Stewart’s old turkey basters.”

Well we wonder what Selena Gomez would have to say about that. In fact I’d bet Justin could do a lot better in the sack than Ricky Gervias. In any case, lots more people would choose to get with Justin than Rickey, millions more.

Justin’s fans were none to happy about Gervias’ joke.

One tweeted: “Ricky Gervais. I hate you. I love Justin Bieber!! do not mess with justin i kill you.”  Another posted: “You don’t know what your talking bout justin bieber, your a mean t***, you don’t know naffing.”

Of course after this fashion disaster we think that Justin might just need some fashion therapy, or at least counselling.