BY Jeanne Adams on May 21, 2012 | Comments: one comment
Related : Justin Bieber, Selena Gomez 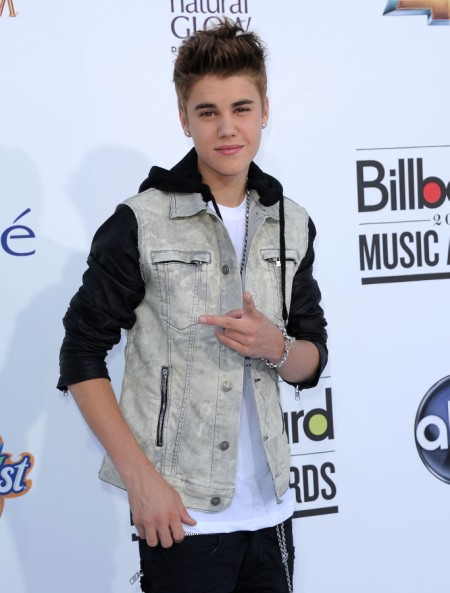 The publicity blitz to convince us that Justin Bieber is a man is still rolling strong with new news that his female fans throw their panties on stage and have gifted his penis with a name. I’ll wait to the end of the article to tell you what it is.

Bieber the Boy Wonder was interviewed by the Sunday Times and it’s more of the same old same old – he’s not a girl but not yet a woman – story. In addition to boasting to the reporter that he does indeed have to shave (just peach fuzz above his lip – once a day, mind you) Bieber reveals his ambition to win over all demographics with his music. He says he new album, Believe, will do just that. “It’s music for everybody, it’s not corny,” he said. It’s a little corny.

He goes on to discuss the paternity test he took to discredit his would-be baby mama, Mariah Yeater, and shows off all four of his tattoos and ideas for new ones in the future.

Oh, Christ… no pun intended. I wonder if he’ll put girlfriend, Selena Gomez’s name inside one of the roses because if there’s anything I got from this article it’s that this kid has it bad. He even took time out from the interview to call her. The conversation went like this: “What’s up baby? I can’t stop thinking about you… I said I can’t stop thinking about you. That’s all. Yes, so, um, I gotta do this interview but I just wanted to call and hear your voice really quickly… Okay, I love you. Okay bye.” No, literally, I didn’t make that up. That was the real conversation. It’s actually kind of cute.

But from the old Justin Timberlake playbook, Bieber wouldn’t say if he was a virgin or not. Instead he got embarrassed and gasped, “Ah-hah… Next Question!”

See? Not a girl but not yet a woman. Oh, and his penis is named Jerry. “Yep! The fans named my penis Jerry, which is funny…. Um, Jerry was actually the largest man.”

I can just picture him blushing while saying that, can’t you?