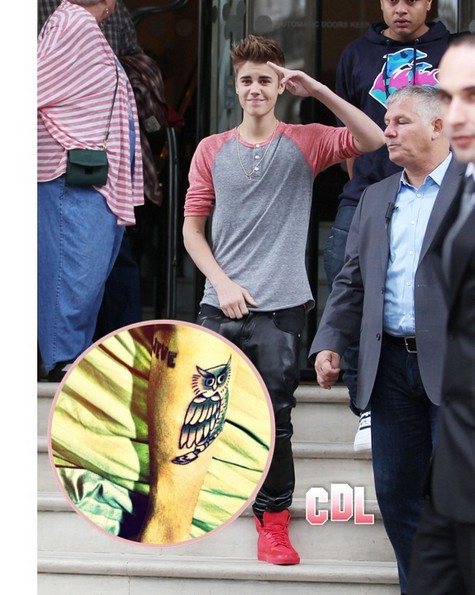 Mother’s lock your doors, notorious bad boy Justin Bieber has taken his image to a new level of super serious by showing off his latest tattoo via instagram on Oct 28 to 3.6 million of his very best friends. The 18 year old Canadian singer songwriter has embraced his adulthood with grace and maturity and each of his tattoos reflects that including the newest addition, an owl. Bieber decided to get out ahead of the paparazzi by leaking the photo himself, “Befo the paps get me”.

The “Baby” singer received his first tattoo, the outline of seagull, when he was just 16, a design also inked on other members of his family. Showcasing his cultural sensitivity and respect for different cultures Bieber also has the name “Jesus” inked on his rib cage in Hebrew and the Japanese symbol for “music” on his arm. Bieber also has the outline of star on his elbow and another shout out to the lord with the face of Jesus Christ inked on the back of his leg and praying hands on the back of his other leg.

So what makes the owl so special, other than being tattooed on one of the most popular arms in world history? Bieber tweeted “OWL symbolizes: Wise, Magestic and Powerful. Best tattoo ever”. This tattoo may be a sign that the world can expect wisdom, majesty, power and probably a lot of poor spelling for the 18 year old super star.

After three albums and starting his third tour, perhaps the “Boyfriend” singer will be taking on a new role as a mature individual and artist. It is possible that Bieber realizes he must evolve as an artist to stay relevant and artistically satisfied. Or maybe he is just way into Tootsie Roll pops. Only time will tell.