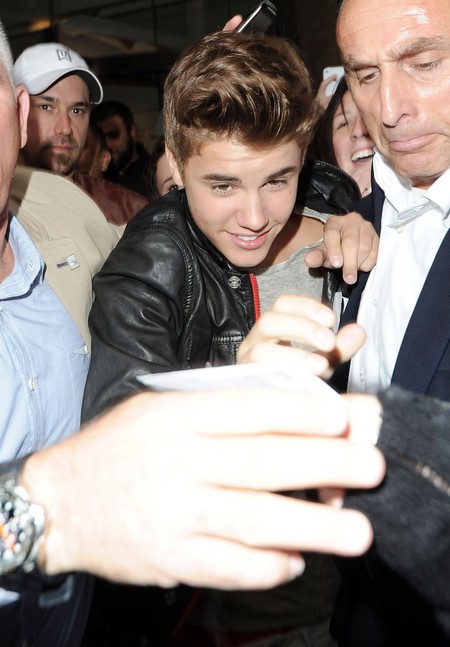 Justin Bieber had to run for his life in London today as a lack of security put the teen idol at risk.  Justin bolted for safety as he was swarmed by voracious female fans!  The wild women even tried to scale the side of Justin’s luxury hotel after he flashed his cute little abs to his adoring fans.

Justin’s serious athletic training is coming in handy as he now has abs to flex and speed to escape his fans.  It seems that Justin need not fear One Direction or The Wanted replacing him as the top teen idol just yet.

The Biebs landed at London’s Heathrow Airport on Monday and was naturally met by dozens of hysterical teenage girls who somehow anticipated his arrival. Due to a lack of security, the crowd got out of hand, and the pop star was forced to dash towards the exit accidently knocking into a bystander who was trying to take his picture.

The chaos continued as Justin was preparing to leave his posh hotel in the city on Tuesday morning after he sent his female fans wild by showing off his abs through a window.  Groups of girls scrambled up the hotel’s brickwork to get a better glimpse of the star or grab a piece of him.

Fortunately, none of the fans fell as they were engaged in the impromptu rock climbing expedition to scale Mount Bieber!  Or is it only Selena who has rights for that?  What would these fans do if they got a hold of their idol?  If you are one of these fans please explain in the comments below.