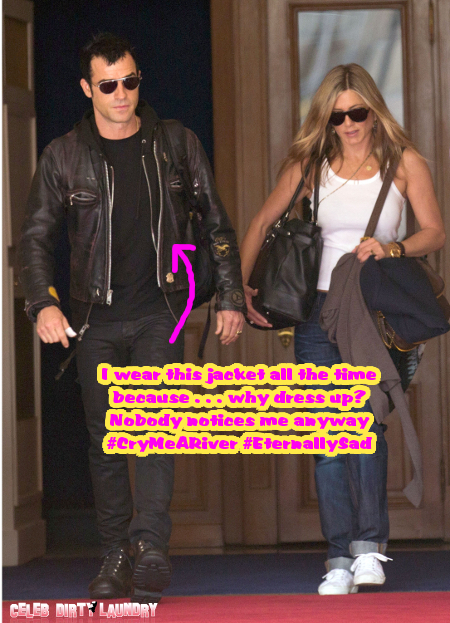 Justin Theroux is feeling trapped by Jennifer Aniston‘s immense fame and popularity, so much so that he might just be getting ready to leave Jennifer for good! Justin, who was once happy and content with his borderline bland New York lifestyle, is having trouble finding his niche in his love’s world of over-the-top glitter and glamor. But is he having trouble coping with something else — is he feeling more than just trapped? So it seems.

Justin, for an extensive 14 year period, dated costume designer Heidi Bivens and was, clearly, the shining star in that relationship. Clearly, he’s not top dog in his current pairing, and this seems to be rubbing his I-always-wear-black-and-grey body of his the wrong way. Jealousy is a dangerous poison, folks, and it appears that JustT has been infected with the most potent kind.

He recently said that whenever he goes out with this Hollywood sweetheart, whether it be on a simple outing or to a fancy dinner, that he’s often time overlooked, claiming that it’s “all about Jenn.” Oh, someone gag me with a wooden spoon! Really, you’re going to whine about something as trivial as this, Justin? You knew what you were getting yourself into the moment you out-of-the-blue left your ex for Jenn. Unless, of course, you are actually an alien from planet Mars and, actually, had no idea that Jennifer Aniston was a bigger star than you when you first agreed to undergo the canoodling process . . . ? I guess this is a valid possibility?

The In Touch print edition, released on June 25th reported:

Things aren’t quite picture-perfect for Justin Theroux and Jennifer Aniston. Sources says Justin – an actor and writer who, until recently, treasured his low-key lifestyle in New York – is having a tough time fitting into his love’s Hollywood world.

“He hates being approached by fans every time they go out,” an insider says. “He feels like he’s living in a fishbowl.”

“He misses the freedom to be creative and funky,” the friend says. But then again, “He has met people he never dreamed of meeting.”

Lately, Justin’s nostalgia for his pre-Jen days has grown intense, so much so that he’s reached out to Heidi Bivens, the woman he dated for 14 years before unceremoniously dumping her for Jen.

“He’s expressed remorse about what he did to her,” the insider reveals. “He really misses her. He feels like he lost his best friend, and now he thinks they should stay in touch.”

Friends say that Justin went from being “the star” in his relationship with Heidi, a costume designer, to being Jennifer’s “sidekick”. A friend says, “In public, it’s all about Jen.”

Justin’s feelings about Heidi are only one part of his general malaise, sources say. A prime example? Although the couple initially planned to share a home in Manhattan, they’ve all but relocated to California. “He misses his old life,” a friend explains. “He misses hanging out with his artist friends and their intellectual conversations.”

What do you all think of Justin’s current display of passive aggression? Do you think he’s being serious, or do you think all of this is just a ploy for attention? I don’t know Justin or JennAn personally (we dined very briefly one evening, but it was very awkward — not much talking occurred), but I’m honestly surprised by how much drama has erupted from this romantic love volcano. I simply think Justin needs to loosen up that leather jacket of his and, if he’d like to be noticed more, put on a bright red shirt instead of those morbid grey/black ones he wears all the time. Is this relationship doomed?

Disclaimer: I never dined with Justin and Jennifer . . . for some reason I don’t think they’d want to dine with me because, well, I’m not as classy/fancy as them.