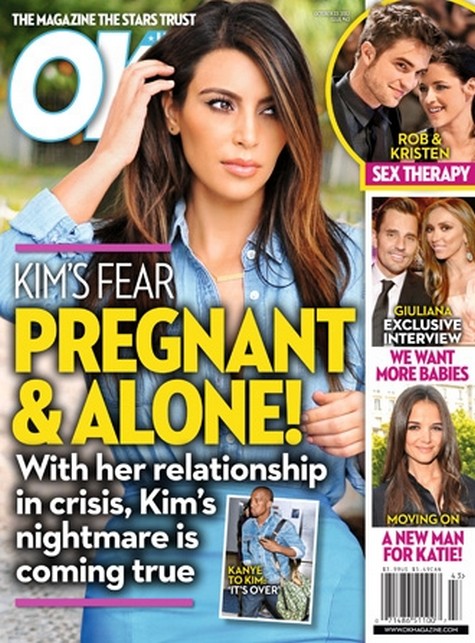 The current issue of OK! Magazine features the cover story ‘Kim’s Fear – Pregnant and Alone.”  This week’s magazine claims that reality TV star Kim Kardashian and her current beau Kanye West‘s relationship is in crisis.  Allegedly Kanye has told Kim that their relationship is over and she is not his “perfect bitch” anymore.  Now Kim believes her biggest nightmare is about to come true, Kim fears she will be all alone and pregnant.

It looks like Kanye may finally be fed up with Kim and the Kardashian machine and has decided it is time to move on.  For once Kanye has met someone who is a bigger fame whore than he is.  Kim is always wanting to take her reality show crew along with them where ever they go and putting everyone on camera.  Kanye’s A list friends are not pleased about it.

Add to this people despise the Karadshians and Kanye has decided to cut his loses.  Kanye is such a snob he does not want a girlfriend who people important to him want to avoid.

Poor Kim, not only is Kanye fed up with her but her former boyfriend Reggie Bush’s girlfriend Lilit Avagyan is pregnant and the news is said to have devastated Kim.  Apparently, Kim, who dated Reggie on and off for years was desperate to have children with him.

Also included in this week’s issue Katie Holmes’ dad, Martin, is looking to play matchmaker for his daughter.  Martin wants to find another man to replace Tom Cruise in her life.  Jessica Simpson who she gave birth to her daughter Maxwell  is getting no support from her little sister, Ashlee.  Jessica has been struggling with trying to lose her baby weight.

To find out more on Kim and Kanye and all the other stories in this week’s issue, pick up the current issue of OK! Magazine, on stands now!