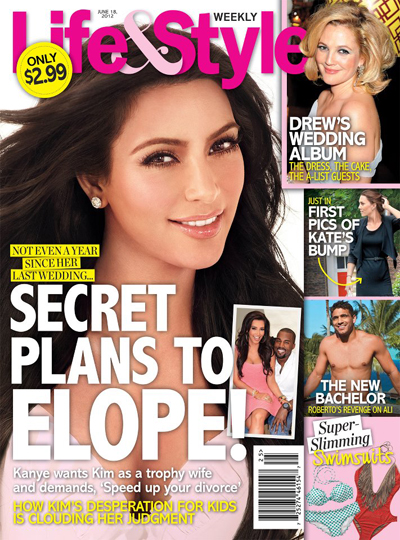 It hasn’t even been a year since Kim Kardashian married (and then divorced 72 days later) ex-husband Kris Humphries, but could the 31-year-old reality star already be planning wedding number three?

According to the latest issue of Life & Style Magazine, Kanye West, who Kim has been linked to since April, is reportedly pushing Kim to hurry and up and finalize her divorce from Kris so that they can get married!

“Kanye wants to marry Kim, and he’s telling her to expedite the divorce so they can start their future,” said a source to the magazine. “Kanye’s like, ‘Just do whatever you need to do to make it go away.‘”

Reportedly, the couple has gotten so close over the past few months, that they have put both of their LA homes on the market and are already looking at rental houses so that they can move in together!

“As things get more and more intense and comfortable, both Kim and Kanye hate being apart,” added the insider to Life & Style. “And as they grow closer, Kanye’s desire to marry Kim — and hers to be married to him — keeps getting stronger.” Read More: Kim Kardashian Destroys Jay-Z And Kanye’s Relationship

And while Kris is supposedly demanding $7 million, Kim is said to be “coming around” to Kanye’s way of thinking, because her “desperation” to have children is clouding her judgement.

To find out more about Kim and Kanye’s secret wedding plans– pick up the current issue of Life & Style for all the details!