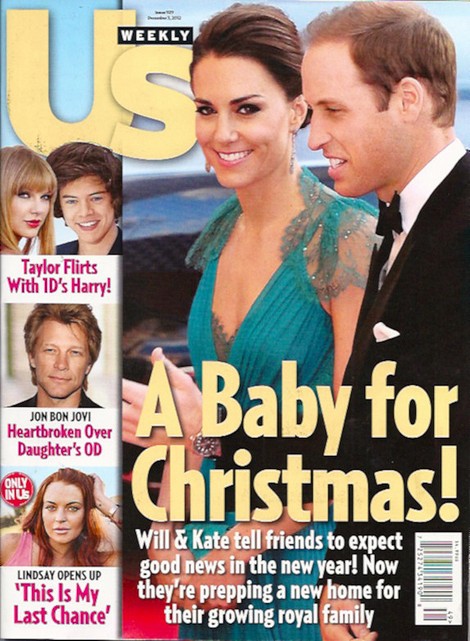 “A Baby for Christmas” is such a vague term. Does Santa just decide one random morning, “Oh, they were so naughty! Let’s deliver them a screaming, vomiting heir!”? According to the latest cover of Us Weekly, Prince William and his wife, the Duchess of Cambridge Kate Middleton, will be announcing their pregnancy in December. The tagline reads, “A Baby For Christmas: Will & Kate tell friends to expect good news in the new year! Now they’re prepping a new home for their growing royal family.” Ah, what a sweet and outlandish rumour!

In the upper left corner are the faces of that horrid Taylor Swift and her innocent looking new boy toy, Harry Styles, from One Direction. Their tagline reads, “Taylor flirts with 1D’s Harry!” Obviously the black widow is flirting with Styles! She needs to write new songs, and Harry’s eyes look like they could be the basis for a great one! Below Swift and Styles is the immortal face of Jon Bon Jovi with the tagline, “Heartbroken over daughter’s OD.” We get it okay? We understand that Bon Jovi is flipped out about his daughter’s heroin overdose and arrest, but jeez, give it a break already? Why do all of the tabs this week have to focus on Bon Jovi’s daughter? Surely there’s better celeb news out there?

Finally, in the lower left corner is the foul face of Lindsay Lohan. In this image, the defunct starlet looks like she’s the love child of Photoshop and a tanning bed, and according to Us Weekly, “Lindsay opens up: ‘This is my last chance.’” If only Lindsay stopped opening up at those AA meetings and instead focused on the remains of her film career, we would have still had some hope for this lost soul. Unfortunately, her future is as bleak as a stomach virus, but kudos to her for trying to grab a bit of the distant spotlight and bathe herself in some celeb ingénue juice.

Us Weekly is hitting the mark this week, so if you’re interested in reading more about Rudolph The Red Nosed Baby, Taylor Swift’s manhunt, Jon Bon Jovi’s half-druggy daughter, and Lindsay Lohan’s tanning bed explosion, head down to your local supermarket and pick up a copy of Us Weekly.

Don’t blame us if your eyes bleed when reading Lohan’s grimy tale.