Kate Middleton’s Pregnancy Woes – She Explodes At Prince William: ‘I Can’t Do This Alone’ (Photo) 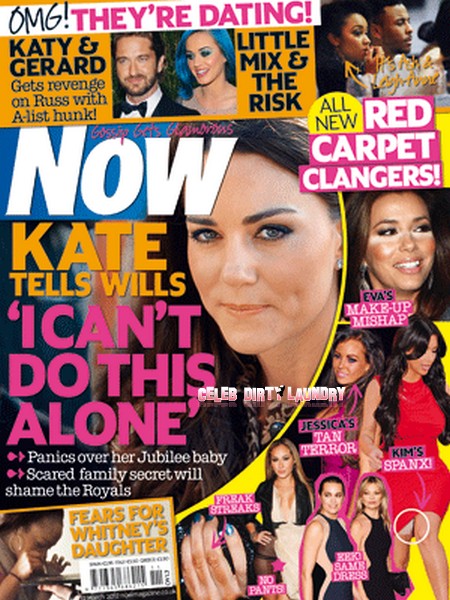 As the pressure mounts on Kate Middleton to produce an heir to the British throne with Prince William there are indications that she is suffering from anxiety.   According to NOW mag Kate is panicking over what she perceives as unreasonable demands that she get pregnant soon – that she produce a baby on demand!

The cover of the current issue of NOW features a story which claims that Kate has told William “I can’t do this alone,” in reference, one assumes, to getting pregnant.

NOW also reports that Duchess Kate is in a panic over ‘her Jubilee baby.’  Of course the tabloid goes further with the outrageous claim that Kate is scared that ‘family secrets will shame the Royals.’  As if Kate wasn’t cleared by the Palace detectives before William was given the okay to marry her…

Of course we would all like to see the charming couple have a child – but only when they are ready.  Kate and William have been married for less than a year so what is the big hurry?

Besides, if Kate can’t conceive, then the couple can always adopt?  Well no, they can’t!  Kate MUST have her own children with Prince William before she would be permitted to adopt according to Queen Elizabeth II.

It seems that it is the royal couple’s duty to provide the monarchy with an heir or two before adoption can be seriously considered – this is because an adopted child would be ineligible to ascend to the throne.  William’s grandmother, Queen Elizabeth II says that while she would consider the idea of Kate adopting in the future, she first wants to see her produce a legitimate heir.

An insider told OK! Mag Print Edition April 9 that Queen Elizabeth II would give her blessing to Kate and Will adopting but “only after they have at least two heirs to the throne!”

We say – leave Kate alone!  She does not need extra pressure – this will not make it any easier to get pregnant, if indeed the royal couple are even trying.