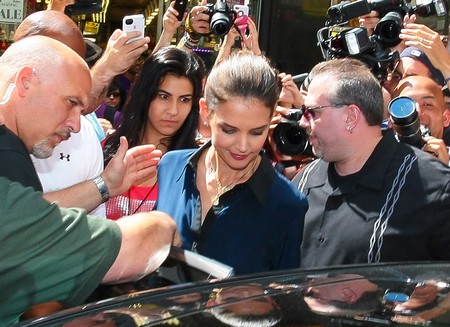 A source said, “Katie filed an ’emergent application’ in New York City on July 3. It’s a motion seeking temporary emergency relief, which can include child support and custody. It also means that Tom is going to have to hire a New York lawyer – he can’t use his California lawyer anymore. The motion also means that both Tom and Katie have to be present in court on July 17. A judge is now assigned to their case, which means it’s no longer going to be an out-of-court settlement. They are scheduled to appear before Judge Matthew Cooper on July 17 at 9:30am.”

This is some of the best news we’ve heard all day. Katie seriously needs to get Suri away from Tom Cruise as his Scientologist freaks will do everything in their power to stop them from “getting away” much like a mafia boss stops someone by making them “disappear”.

Many believe that Katie filed the “emergent application” because she was afraid Tom might not co-operate with her. The source adds, “It’s unlikely for a celebrity to file an emergency hearing, because most celebrities settle out of court because they don’t want the media involved in their case. Katie and Tom are now going to have an open court room, which means that anyone can walk in and see what’s happening. Plus, they are putting their case in the hands of a judge who is going to determine what happens next. Most public figures don’t want that – it’s a last resort. It’s super-aggressive for Katie to have taken these steps. It suggests that there’s going to be a contentious divorce battle to come.”

We hear you Katie and we hear you loud and clear. Do what you can to get Suri away from this madness and hide her away, until you’re absolutely sure that Tom Cruise either stopped drinking the Kool-Aid or went back to play in Xenu’s courtyard.

What do you think readers? Should Katie get Suri away as quickly as possible? Let us know in the comments below your thoughts on the matter.