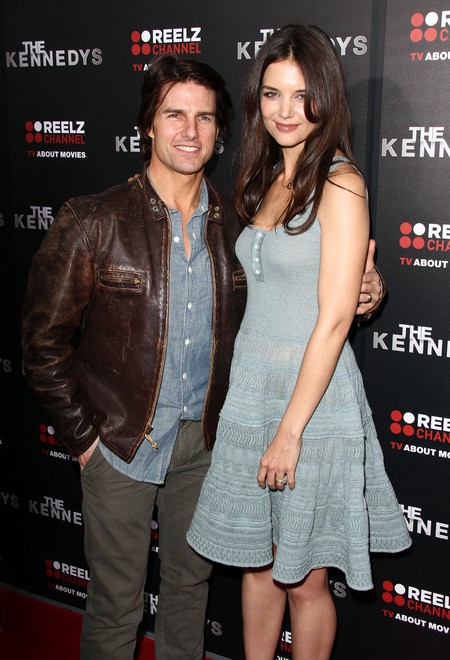 Tom Cruise begged Katie Holmes to take a trip to Iceland with him to celebrate his 50th birthday, but she completely declined his invitation, destroying what little hope he had left to rekindle their marriage. Sources reveal that this led to a huge fight over the phone and Katie made it very clear that she wanted to move on because as far as she was concerned the marriage was dunzo.

During the fight, Tom criticized the way Katie was raising their daughter Suri. Apparently Tommy does not approve that Katie lets Suri wear lipstick and nail polish.  Tom feels Suri is too young for those things and does not want his little princess to grow up too fast. But Katie came out with all guns loaded and fired back at him that he doesn’t spend much time with her or Suri.  So basically it is none of his business.

Now Tom was taking a big chance here, insulting any women on how they raise their child is treading on dangerous ground.  So predictably all hell break loose.  Tom was clearly digging his own grave.

I can understand how Tom may feel about Suri wearing this crap, keep in mind she is only six.  I’ve seen children much younger wearing nail polish and I think it’s unnecessary myself.  However, just because a child wears nail polish it doesn’t mean they’ll be some sort of prostitute when they’re older. Lipstick at six year’s old is pretty stupid, that makes no sense whatsoever.  Of course that is just my opinion.  I also have to think that the reason behind Katie dumping TomKat’s butt is a lot more than nail polish and lipstick.  Maybe those were just the straw that broke the camel’s back!

Either way, Katie has officially made it clear that she wants to move on from Tom, the relationship is just not meant to continue. Let’s hope this doesn’t make Tom go cra cra and start doing stupid things, unless they’re funny and entertaining like a breakdown on live television. I’d like to see that, I’d even make a GIF of it.

Click on the thumbnails below to enlarge 7 pics of Katie Holmes and daughter Suri Cruise getting some late night ice cream in New York City, New York on July 3, 2012. Katie is trying to make Suri as happy as possible with her bitter divorce battle with Tom Cruise heating up.