Katie Holmes Reaches Out To Sandra Bullock For Support 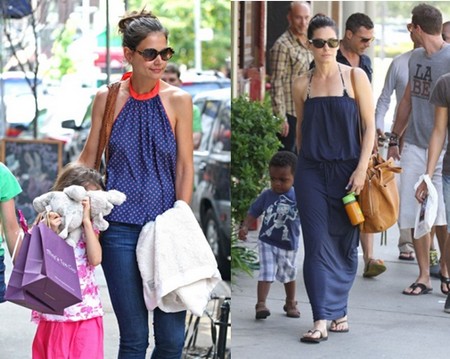 Katie Holmes was desperate to escape her miserable marriage to master control freak Tom Cruise. After years of being treated like a child by her husband, Katie became depressed and unable to cope. Tom thwarted Katie’s ambitions to be an A-list superstar and also refused to give her another child. Even though Katie’s heart was set on showing her clothing line during Fashion Week in New York City, Tom was against the idea and so there would be ‘no Fashion Week for Katie.’

According the article ‘Tom and Katie – Marriage: Impossible’ in Star Magazine Print Edition, July 16, this was the gloomy state of affairs in the sad life of Katie Holmes when she decided to break away.  According to Star, last Christmas is when Katie realized that there was no hope for her if she remained in the marriage. “Katie actually first decided last Christmas that she wanted to divorce Tom, and started talking very quietly to her lawyer,” according to her friend.

As bad as the situation had become, things got worse. The final straw, the last indignity for Katie, according to Star, was the ‘recent reports that Tom has been growing closer to the sexy Oblivion costar, 32-year-old Ukrainian born actress Olga Kurylenko, on the film’s set in Iceland. Katie flew there in June to talk with Tom – and was pictured looking miserable with him on June 16 just 12 days before she filed for divorce.’  We covered this possible dalliance between Tom and Olga on CDL – Tom probably knew that the marriage with Katie was kaput and he might already have been looking for his next acolyte  – both for Scientology and for company…

So Katie reached out to friends for support – and who better than Sandra Bullock – after all she certainly had plenty of experience with an ugly divorce.  Star cites a source: “she’s been secretly reaching out for support from friends including Sandra Bullock. They met years ago through their mutual friend Keanu Reeves,” says the source.  “Sandra knows all too well about being in a bad marriage, and she’s been a real comfort to Katie.”

Katie’s divorce and Sandra’s couldn’t be more dissimilar.  She was married to serial cheater, Jesse James, who both humiliated Sandra and broke her heart.  Katie is walking about New York City, schlepping daughter Suri Cruise around as usual, smiling and planning her brilliant career – she is about as heartbroken as Kim Kardashian was when she filed for divorce from Kris Humphries.

Do you see Katie Holmes and Sandra Bullock as BFFs?  Somehow I don’t.  Let us know your opinion in the comments below.