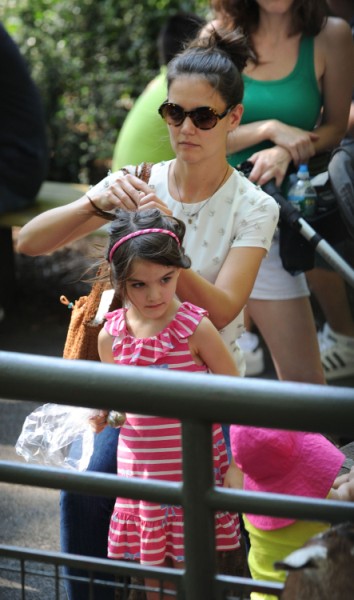 Katie Holmes is starting to get serious in her role as a single parent and embarking on a campaign to strip daughter Suri Cruise of all Tom Cruise’s coddling, spoiling influence, even when it comes to her wardrobe!

Gone will be the make-up, high-heels, fancy purses and designer dresses and Katie will replace them with more appropriate, “conservative” duds. And no more freebies. Katie’s telling her designer friends that she will no longer accept free clothes for her little tyke.

“Katie has been returning unsolicited gifts and loans from designers for Suri since she arrived in New York – which is to be her home base now, far away from Tom. She’s issued instructions to remove Suri from all freebie lists. She’s also put the word out in LA to stop any mini-me diva products being sent her way,” a source told Female First magazine. “All that inappropriate dress up and make-up was down to Tom and Katie’s key word now when it comes to Suri is ‘normal’. Tom loved to spoil Suri and indulge her, but Katie has other ideas.”

The source also says that Katie has always been the primary disciplinarian in the family where Tom would just let Suri do whatever she felt like. I heard this had something to do with Scientology and the fact that Tom treated Suri like an adult, free to make her own decisions. My mom still doesn’t think I’m mature enough to do that!

This all goes along with Katie’s PR push to convince the world that she’s a great mom and willing to go to any lengths – even taking Suri to a pet store and NOT buying her anything resulting in a massive tantrum – to mold her daughter into a normal, functional human being and not the poster child of a crazy pants religion. She’s also enrolled Suri in a private Catholic school where the students have to wear uniforms. I wonder how Suri took to that. I went to one of those schools and wore a uniform every day until college. I loved it! The fact that I could wake up every morning and not have to worry about what to wear was heaven. I’m not so sure a girl who has stylists and designers tripping over themselves to dress her will feel the same way though!

What do you think of Katie’s decision to downplay Suri’s wardrobe? Is she taking her new hard parenting stance a little too far or is this just what Suri needs?