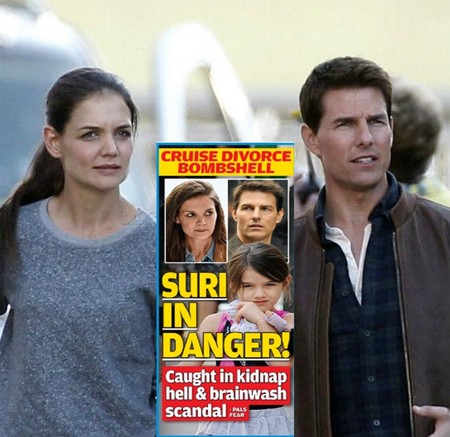 Tom Cruise and Katie Holmes may have shocked the world by divorcing quickly and seemingly amicably just days ago but Katie is still nervous that her daughter, Suri Cruise, could be in jeopardy of being kidnapped by some of Tom’s disgruntled Scientology thugs who are not happy about all the Scientology bashing that has taken place over the past two weeks.

The Globe magazine features a story this week that Suri has been in the middle of a kidnapping and brainwashing scandal that has only been narrowly avoided by the new detente between Tom and Katie. It’s not like Katie was imagining things. Scary dudes were following her around all over NYC (although they naturally denied it) and most defectors of Scientology have said brainwashing is the name of the game in the church-affiliated school that Tom wanted to send Suri to.

Tom Cruise is a God in the Scientology world, and Suri, it’s little princess. I’m sure a lot of avid followers are having a tough time acknowledging that Katie won primary custody in the divorce settlement and would love some payback. It’s not like Scientologists are known for being warm and fuzzy when things don’t go their way. I’m telling you. Read the  Paul Haggis Scientology article in The New York Times. It’s eye-opening! Although the particulars are private, and we may never know for sure who was awarded what, rumors abound that Katie won the right to keep Suri in NYC and she will attend a normal primary school this Fall. No auditing for her! Also, I heard that Katie wants a full-time nanny that will accompany Suri when she visits her dad. She’s not there to spy but she is supposed to make sure the crazy talk is at a minimum. Tom apparently agreed to all of this while Suri remains young, however, the religion question is fair game when she gets older. That sounds fair. Hopefully, Suri is confident and smart enough to not fall for Scientology’s method of preying on the weak and confused and she can come to terms with her looney tunes father like the rest of us have.

What do you make of the Globe’s kidnapping story? Do you think Suri is out of harm’s way or should Katie keep her guarded for awhile until the divorce calms down?