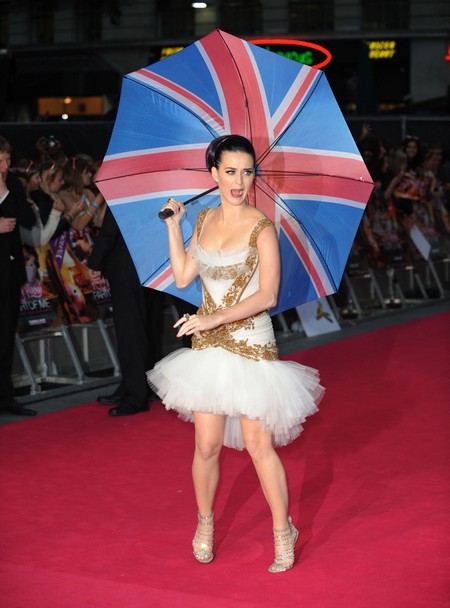 During the red carpet for Katy Perry‘s film “Part Of Me” last night at Leicester Square, the “I Kissed A Girl” superstar was asked if she would ever consider moving to the UK and she replied, “I love beans on toasts, the monarchy and the countryside. Prince Harry is single and I love a hot ginger.” Wait! Did she just say Harry’s “hot”, oh yeah!

First of all, I think that Katy would make an excellent princess, with all her colorful hair choices and wild risque fashion statements. She would actually make one hot princess if you ask me, so I give the thumbs up of approval. I know there’s Kate Middleton who is quite the hotty princess herself, but Katy has her own charm that would certainly add sparkle to the palace.

I wonder how Russell Brand feels about this, knowing that his ex-wife has now moved on from him to a “hot ginger”. I’m left wondering if he will go into some sort of weird form of depression.  Since he now knows his ex-wife has made it official,  she has decided to move on up much higher than him? Maybe he’ll have some sort of breakdown, hopefully on live television of course, because nothing is better than a mental breakdown on live television.

I know that it sounds cruel, but I think it would be hilarious, maybe Russell could be throwing around a chair or two or maybe or he’ll just say some stupid jokes about the matter.

What do you think about a Katy Perry and Prince Harry hookup? One thing is for sure, there are many women with “hot ginger” crushes before Katy; Cheryl Cole, Rosie Huntington-Whiteley, Adele, Amy Price and no doubt there will be many more.

Click on the thumbnails below to enlarge 24 pics of pop singer Katy Perry arrives at the UK Premiere of “Katy Perry: Part of Me” in 3D at the Empire Cinema on July 3, 2012 in London, England.