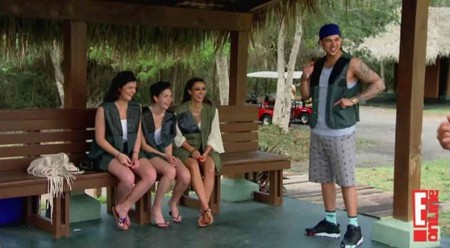 Tonight on E! is an all new episode of Keeping Up With The Karadshians. On tonight’s show Kris Jenner‘s planned a family vacation and it continues in the Dominican Republic. If you missed last week’s show called “Dominican Republic, Part One”, we have a full and detailed recap for you here.

In the previous episode, the family went on a big vacation to Dominican Republic.  Kourtney’s indecisiveness caused herself, Scott and Kim to miss their flight. Bruce was stewing over Scott. Kris drank a bottle of wine and then thought she could drive a jet ski (I love Kris’ responsible parenting).  Khloe reminded Kris that it’s ILLEGAL to drink and drive, Kris quipped, “This is a different country.”  Kris throws  caution and responsible parenting to the wind and drives that Jet Ski.  Later, Kris jumped into the pool clutching inflatables, clearly drunk too.

Khloe and Kourtney have a chat about Kris wanting to meet up with Todd (the guy that broke her marriage up with Robert Kardashian) and they agree it’s a horrible idea.  Kris makes a huge mistake by attacking Kourtney’s relationship at the dinner table.  Scott and Kourtney swung back, informing her that they won’t take relationship advice from someone that is sneaking around to meet up with a guy she still has unresolved feelings for.  Bruce started to lose his mind over the Todd situation.  He storms away from the table and the girls all leave Kris sitting alone as well.

Tonight, Kris will actually wake up with a mysterious medical condition or so she thinks so, but it’s an allergic reaction that swells her up, Scott feels like an outcast and Bruce takes the kids shooting, but will Kim be able to keep up the pace?

Tonight is going to be another crazy episode that you won’t want to miss, so be sure to tune in for our live coverage of E!’s “Keeping Up With The Kardashians” tonight at 9PM EST!  Meanwhile, while you wait for our recap hit the comments and let us know what you think of season 7 of “Keeping Up With The Kardashians” so far!  Check out the sneak peek video of tonight’s show below!

RECAP: Bruce moves his things downstairs, he is mad at Kris for finding out that she hooked up with her old boyfriend and is communicating with the guy.

Khloe is leaving her family in Domenican Republic, she is returning to Dallas to be with her husband. Kim is checking out photos of the day with her brother and Scott, they are all on the bed. Scott is bored and wants to go hang out, but nobody wants to go.

It’s dark out and Rob gets Scott to sneak over to Kendall and Kylie’s suite and scare them; the girls are scared and made at the guys.  The next day, Bruce wakes up Scott and asks him if he was drunk when he pulled the prank on the girls last night. Kim gets a text message from her mom to go see her immediately, she heads there with Rob and they find their mom’s lip swollen, Bruce walks in and says it is God punishing Kris because she is communicating with her old flame. Kim asks her mom if she snuck out in the middle of the night to get plastic surgery because she looks like Daffy Duck. Kourtney walks in and she is shocked, so are the other girls. As Bruce walks out, he tells Kris to check her emails maybe there is a new one from her old lover!

Kim decides to get a massage while Bruce takes Kyle, Kendall, Kim and Rob skeet shooting. Kim tries it, but she doesn’t like it. Meanwhile, Koutney is at the beach with Mason. Scott is still sleeping off his hangover, which isn’t making Kourtney happy in the least.

Bruce is back and Kris is still swollen, so he heads out for a meal with the rest of the family.

Everyone is at the pool and Kim asks Scott if it is true that he peed in the trash can last night in the kitchen. Kourtney tells Scott that he shouldn’t be drinking during the day. Scott is upset, he feels like everyone is nagging him. He says he wants to go home and Kourtney tells him to then leave and ups and does just that and says to everyone, “I don’t even want to come on these stupid family vacations anyways”.

Rob blames Kim for causing Scott to leave, they all get into an argument over the whole thing. Kris comes out to the pool and Mason is a little afraid to look at her with her lip so fat. A nurse arrives and gives Kris some pills for her allergic reaction, Kris realizes that Scott is not there. Bruce walks in and wonders about the same thing, Kourtney doesn’t care and is not calling him, she just thinks he headed over to another hotel.

Bruce asks Kourtney if she is ready to deal with this for the rest of her life, every time Scott has a tantrum he runs away. Kris takes the opportunity and tells Bruce to support her and trust that she didn’t do anything with Todd and she’s not interested because she loves Bruce.

The girls are filming a family music video, its kind of become a tradition with the girls.

Bruce goes to see Scott and tells him that just leaving is not the way to deal with things. Scott goes on to tell Bruce that all he wants to do is make Kourtney happy, he is scared to do anything. Bruce realizes that Scott is sensitive and because he is not married to Kourtney, he feels like he is always on the outside.

Bruce takes the time to speak to Kourtney and tells her that Scott doesn’t feel like he is a part of the family, he’s insecure and she needs to make him feel better.

At dinner, Scott returns and Mason is thrilled to see his daddy. Scott takes the time to thank Kris for arranging the family trip. Music starts and Bruce gets up with Kris and starts dancing which gets the rest of the family to get up as well.

The next day, Kris tells Kourtney that she has to commit to Scott because he is feeling disconnected because of her.

The family surprises Kris with dinner and they all tell her the “pit” of their trip and the “peak”.  Kourtney takes a  few minutes to talk to Scott, he really wants to marry her but tells her that he is not going to try forever. He goes on to tell her that she doesn’t show her appreciation for him and what he deals with in her family. Kourtney gives him a bracelet she bought him to prove that she is committed to him.