BY Cate Meighan on July 15, 2012 | Comments: 3 comments
Related : Keeping Up With The Kardashians, Reality TV, Recap 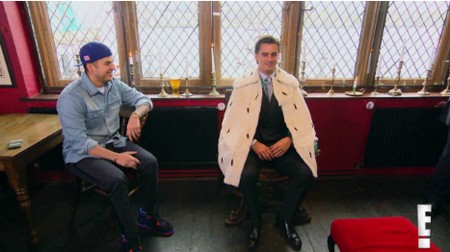 Tonight on E! is an all new episode of Keeping Up With The Karadshians called “Kim’s Man Calls, Kourtney’s Man Falls”. On tonight’s show Kim & Kanye are off to London and trouble is right behind them.If you missed last week’s show called “Sometimes You Need To Adjust Part 2”, we have a full and detailed recap for you here.

On last week’s episode it was part 2 and we got to see Kanye West make his debut on Keeping Up with The Kardashians. Kim was reluctant to talk about her relationship with Kanye West; Khloe continued to feel pressure from her family and had to decide whether to return to New York to attend the opening of Scott’s restaurant.

On tonight’s show Kim is off to London with her new boyfriend Kanye West. Kim also brought Jonathan along on the trip and he wants to go on the London Eye. But Kim thinks it takes too long, but Jonathan assures her they will speed the Ferris wheel up for her.  Of course because she is Kim Kardashian, right?  Meanwhile Kim explains how it is always fun to do appearances and that is why she brought Jonathan along with her.

Kim is headed out to launch her new fragrance with Jonathan.  She claims it has been a dream of her to launch a fragrance and now her dream has come true.  Kim makes a point to work hard and play hard–but apparently her friend Jonathan isn’t keen on her interpretation of fun.   Meanwhile Scott Disick heads to London and decides to try to get knighted.  What a moron!

Kim tweeted about tonight’s episode “Keeping Up With The Kardashians is on tonight!!! This is the London episode! OMG its the funniest!”

And here we go with the Live Recap!

Kim’s in London promoting her latest fragrance and so the family decides to meet up in the name of work. Two minutes in and already ALL that Kim is talking about is Kanye West. She worries about getting time to see him in London.  She loves the things he sent to her room. You get the idea. Kim is clearly obsessed with yet another man.  Meanwhile Scott and Rob are doing a promotional thing in London so while Kim fixates on Kanye they plot their partying.

Kim’s friend Jonathan has tagged along to London and is regretting it as he has been ditched and ends up in his hotel room watching the Queen’s Jubilee on television with Scott. Later Scott decides to take Jonathan sightseeing with him and Rob.

I think those rumors about Kris and Bruce fighting are obviously true. She just rags on him about everything and then she of course, blames him for pushing her buttons.

Bruce later goes to lunch with Khloe and Kourtney and they commiserate over how badly their mother treats poor Bruce.  They feel Kris shows him no respect and I’d have to agree.

Meanwhile in London Scott shocks Rob by actually touring London and digging deep into its’ history rather than its women.  There is an ulterior motive, Scott really hopes to return to the US with a title such as, “Lord”.

Bruce, Kris and Khloe are traveling to Boston and Khloe is losing it because of the fighting.  Kris is using all of her interview time to bash Bruce for all of his “solitary hobbies” and how they drive her nuts.  Kris tries to explain in private how she has shielded Khloe from the irritating things that Bruce does.

Scott is taking the whole “Lord’ thing to a special level.  He bought a fur cape and walking stick to go with the title.  He is prepping for his London club appearance and claims that having a title will boost his confidence.  Or arrogance, because “Lord Disick” refuses to shake the commoners’ hands that came out to see him.

Finally Kanye shows up to visit with Kim.  We’ve only heard about him for the whole episode.  Jonathan is now fighting with Kim because she invited him to come and be with her in London, yet she has made no time at all.  He’s tired of hanging with Scott and ready to hightail it back to New York. They hash it out and Kim agrees to make time for her best friend, somehow.

Bruce is losing his mind because he, Kris and Khloe have an event to get to and he is pushing them to be ready early.  He is relentlessly on them and the tension is so bad in the car as they travel to an appearance that I have to wonder if it’s this bad all the time.

The crew returned home from their various trips and Khloe drops in on the Jenner house with a big bottle of wine to help mend fences.  Tune in next week to find out if Rob is going to move back home!