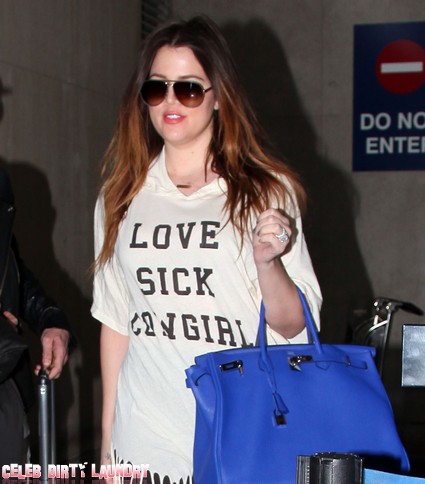 Khloe Khardashian has insulted Kris Humphries on live TV calling him rude and low class.  Khloe told the interviewer that she warned her sister Kim Kardashian against marrying Humphries because she could not imagine what see possibly saw in the NBA star. She thought the marriage was a mistake but of course covered herself by saying that she supported Kim because she wanted her to be happy. You can see Khloe’s disdain and dislike for Kris as she discusses his rude behaviour on ‘Jimmy Kimmel Live!’

Khloe was particularly upset with Kris for suggesting that her marriage to NBA player Lamar Odom was fake because they married after only one month. Of course watching the interview and hearing Khloe tell Jimmy about how honest and direct she is convinces me that she is just as phony as the rest of the Kardashians. There is some irony here as Kris has said that Khloe was more honest and direct than the other Kardashians – although he still admitted that he didn’t like her.

Jimmy moved quickly with Khoe through Lamar’s trade from the Lakers to the Mavs and right on to her dislike for Kris.

Khloe told Jimmy:  “I personally didn’t mesh well with Kris before they got married.  The very first time I met him he said, ‘No one gets married after 30 days. How much longer are you gonna put up with this charade for?’  That’s kind of rude. He just rubbed me up the wrong way. My guard was up because I wasn’t crazy about him.”

ALSO:  Khloe Gets A New Radio Show And A New Father

Khloe also called upon her famous honesty to admit that she warned Kim that Kris wasn’t right for her. Who would be right for Kim? How about the entire front line and backfield of the New York Giants?

Khloe went on:  “I gave my opinion. Which everyone saw in the wedding special!  We’re sisters. I’m very honest, I’ll tell you how I feel.  With Kim I said my piece. I want her to be happy, and if that makes her happy then fine.”

What can we conclude from this interview? The Kardashian/Jenner corporation has circled the wagons against Kris. He is now the enemy and we can expect more bad-mouthing of the dude as time goes on.