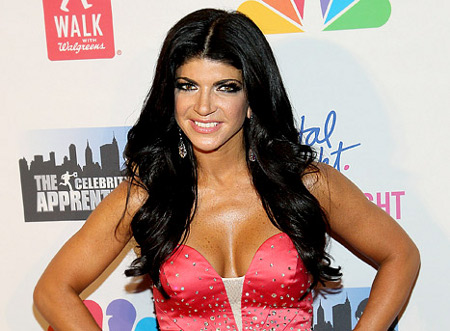 Teresa Giudice’s husband, Joe Giudice, has some outstanding debt to pay to society it seems, as he will be going to trial for fraudulently obtaining a fake driver’s license. And Teresa’s former co-star, Kim Granatell, isn’t holding any of her criticism back when it comes to this couple, saying that Teresa is a mess and is just as much to blame as her husband is — and that she should go to jail, too!

Kim says, “I hope the judge throws the book at him. What goes around comes around and it’s all catching up to him. Teresa is as guilty as he is, and just as dumb.”

Wow, Kim, you sound like our neighbor after a stint of vodka drinking and kicking puppies. You know what they say, “Anger is one letter away from danger!”

In the exclusive interview with Radar Online, Kim continues her rage filled rant and says, “Maybe Teresa should join him in prison and they can have his and hers bunks so that they can do a spinoff show called The Real Inmates of New Jersey.” I once knew a girl who’s like Kim. She was squarely built and sniffed glue sticks in order to give her an extra edge when punching someone in the head.

Kim has never really been the greatest of friends with her co-stars of Real Housewives, but this recent outburst just once again cements the fact that crazy bitches shouldn’t be allowed to roam the world of reality television, nor should they be allowed to sniff glue sticks. It’s bad for your brain and the careers of therapists and stuff. Let us know in the comments below what you think of this cray-cray tale of rage.