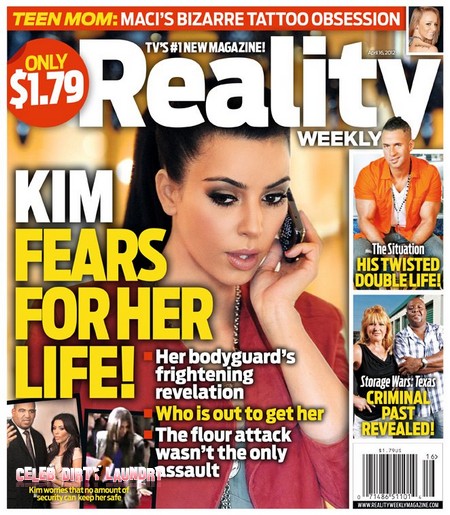 Kim Kardashian’s personal bodyguard reveals that Kim is in mortal danger and fears for her very life.  Kim was attacked last week by the crazed flour bomber but that was not the only assault upon her.  There are other enemies of Kim besides PETA who are out to get her and according to the bodyguard these are far more deadly.  There is a ‘frightening revelation’ by the bodyguard that remains secret for now.

The current issue of Reality Weekly features the cover story ‘KIM FEARS FOR HER LIFE’ and matters are looking dire for Kim.  Not only is Kim facing an ugly public divorce trial pitting her against her estranged husband, Kris Humphries, but she was publicly assaulted last week by a flour wielding PETA fanatic.  But inside this week’s issue we will learn exactly who is posing the deadly threat to poor Kim.

Kim has expressed fears that no amount of security can keep her safe and she is resorting to desperate prayer as a last resort.  Who could hate Kim enough to want to kill or seriously harm her?  I mean she is a bit obnoxious but murder seems a little extreme.

Also on the cover of Reality Weekly we are promised an expose on Mike “The Situation” Sorrentino’s ‘twisted double life.’  Come on – the dude is simply hooked on steroids, pills, drugs, and booze and has been for years – isn’t that pretty standard for many Hollywood stars?  Is there even more wrong with Mike?  What is implied by the term ‘double life?’

Also on the cover it is suggested that the criminal past will be revealed of people involved in the reality TV show ‘Storage Wars: Texas.’   And of course the issue would not be complete without revealing Teen Mom’s Maci Bookout’s obsession with tattoos.  Where are those tattoos?

I am most interested in learning who it is that wants to get Kim.  What about you?  Let us know in the comments below.