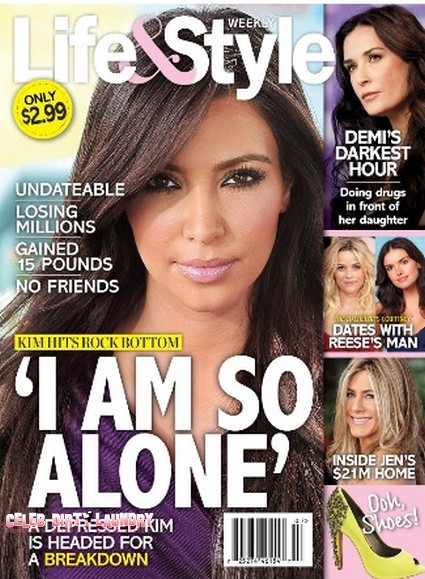 The current issue of Life & Style magazine features the cover story, ‘Kim Hits Rock Bottom – I Am So Alone.’  OMG I just cannot feel any sympathy for this women blaa.  If you watched her reality show Kourtney & Kim Take New York you would understand what I mean, she is totally repulsive.  Anyway, the magazine claims that poor Kim is all alone and has hit rock bottom after filing for divorce from her husband Kris Humphries after just 72 days of marriage.

The magazine claims she has become undateable and is losing millions of dollars because of the negative press she has been getting.   Rumor has it she was turning to her former flame Reggie Bush for some TLC.  When Reggie dropped the news to his mom Denise Griffin she was not pleased. Denise urged Reggie not to take Kim back! She was sure that Kim has ulterior motives and does not want to see the two of them hook up again.

Now if that is not enough for poor Kim, apparently she is gaining weight – a whopping 15 lbs and is starting to look like Miss Piggy.  Worse still her friends have deserted her and she is headed for a breakdown.

The truth is probably closer to the fact that although her and her team edited her reality show to make Kris look bad it failed miserably.  Kim came across as a self entitled bitch and I think people are just totally fed up with her.  What do you think, are you over Kim Kardashian?  Sound out in the comments below!