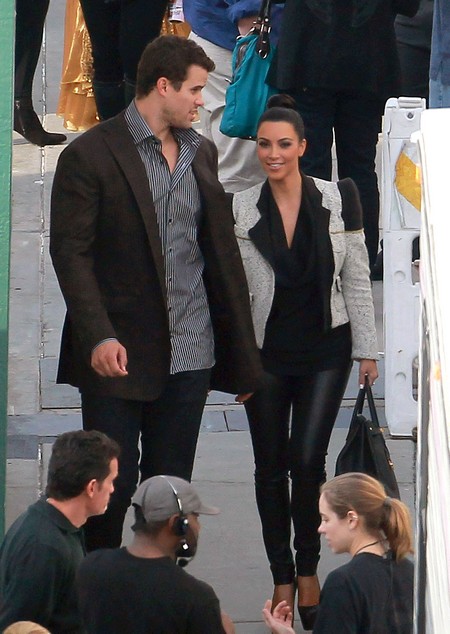 It seems Kris Humphries is turning the tables on Kim Kardashian and her entire family.  Everyone likes reality television, especially the Kardashian crew – but maybe not this time.  The duo has been unable to settle their divorce out of court and so both are scheduled to be deposed in June.  Humphries attorney is insisting that his ex go first.

Radar Online commented on the entire mess – and since Kris is convinced and claims to have proof that he was set up to be the bad guy on the pathetic reality show ‘Kourtney & Kim Take New York’ – it is no wonder he wants his own reality show to show what Kim is really like. Kris’ reality show will be the filming and subsequent airing of the divorce trial.  Kim is terrified!  We are definitely all for team Kris!

“Kris is anticipating that Kim will be deposed first, this is something that his lawyer is insisting upon,” the source says. “Kim’s deposition will take place at her lawyer, Laura Wasser’s office, in early June and they are still wrangling over whether or not it will be videotaped. Kris’ depo will take place shortly thereafter and both should have their formal sit down interviews for their divorce proceedings by the end of June.”

All along Humphries biggest bone of contention has been the wedding gifts, namely, what Kardashian did with them.

“Kris wants a divorce trial so that the truth can finally come out. Amongst other matters, he wants to know about the Ferrari that the couple got from a very wealthy Malaysian businessman that attended the wedding,” a source says. “Kris was at Kim’s house when the car was delivered — it was given to both of them, but Kim has kept sole ownership and has used it extensively. She will be asked about it, under oath, on the stand at the trial.”

The Kardashians have built half of their empire on reality TV and that’s because people watch what they do.  Would you watch Kim and Kris duke it out in court?  Should that be aired as well?  Hit up the comments and let us know your thoughts.