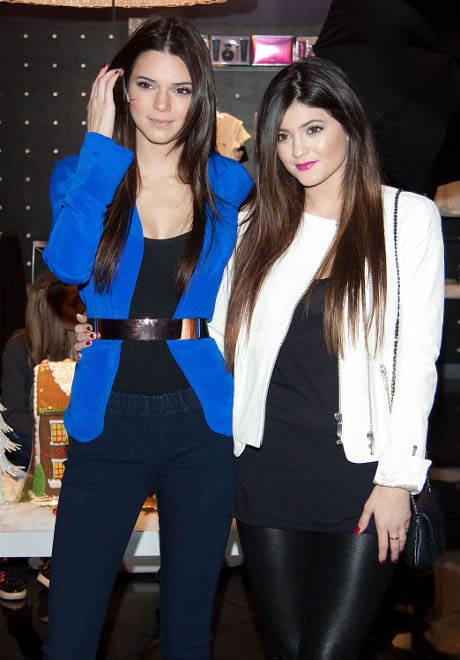 Kris Jenner is expecting a new client! Her favorite daughter Kim Kardashian is baking a cupcake in her oven with Kanye West. The family has been tweeting and promoting the new storyline for their reality shows non stop. As happy as they are for bubble butt there are sure to be some sour feelings.

Little brother Rob Kardashian will be even more ignored as far as support for his career from the Momager. My Celeb Dirty Laundry sister Rachel Rowan wrote a great article about Khloe Kardashian probably being crushed about bubble butt’s baby news when she herself has struggled with infertility. The people who may be affected the most are the youngest money makers Kendall Jenner and Kylie Jenner.

Kendall and Kylie are the babies of their family.  They are also the rising stars of Kris’ empire. The girls are big stars but big step sis Kim is the biggest star of the family. A new baby will elevate Kim’s fame to a whole new level and she will steal the thunder from Kendall and Kylie. Right now big momma spreads her energy between all of the girls, but I can see Kris switching her focus back to only Kim.

In the first season of Keeping Up with the Kardashians, Kris openly chose to work with Kim over Kourtney and Khloe. She told them that she was only focusing on Kim to develop a perfume, and later she would focus on getting the other girls a deal. Kourtney and Khloe explode with anger and Kris tries to smooth things over, only she makes the situation worse. Kim just stands there with a sly smile, knowing she is the star and she has it all over her sisters.

Kris was very excited to become a grandma, but she also gave Kourtney a lot of grief for not being married. I can see Kris glossing over the messy situation Kim is in with her estranged husband Kris Humphries to promote not just Kim as a celebrity but the cupcake that will continue to bake until the end of June 2013. It’s too bad Kris closed her store Smooch. Her grandkids would have been great spokes models for the store, and having Kim attached to the project would have made business go through the roof.

On the other hand, Kendall and Kylie being aunts to Kim’s baby would be a good thing. These girls model clothes that are too old for them and sexualize them, but they are not nude or semi nude like Kim. Off camera Kendall and Kylie are stylish, not trying to be naked in public wearing see through blouses and butt enhancing bandage dresses. They also don’t have nude pictures of themselves with their boyfriends floating around the internet like Kim and Kourtney at their age or a sex tape leaked on line. So far the girls don’t have any DUIs or jail time like Khloe.

I think Kendall and Kylie will be the only good female role models for the Kimye bambino. What are your thoughts on Kim Kardashian’s pregnancy? How do you think Kanye West and Kim Kardashian’s baby will turn out?