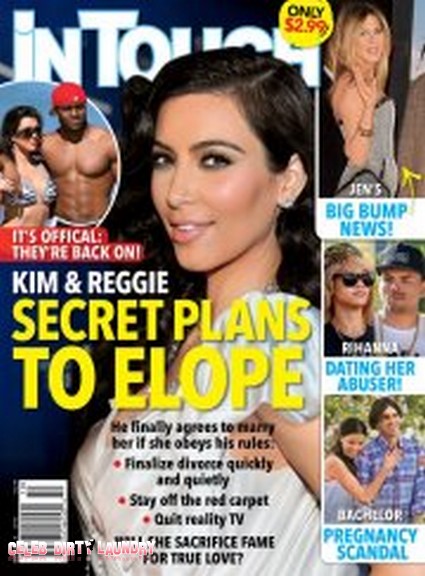 The current issue of In Touch features a cover story explaining the details of Kim Kardashian‘s secret plans to elope with Reggie Bush. It seems that Kim’s plans are not really that secret since they are plastered across the cover of a tabloid! In any case let’s go through the details of this startling revelation and decide if they are believable. Reggie has promised to marry Kim but only if she can comply with a few conditions.

First we ask the question: are Kim and Reggie a viable couple? And the answer is an obvious yes. In fact Kim turned to her former flame for some TLC after her split from Kris Humphries. When Reggie dropped the news to his mom Denise Griffin she was not pleased. Denise urged Reggie not to take Kim back. She is sure that Kim has ulterior motives and did not want to see the two of them hook up again.

But Reggie has conditions attached to this elopement and it is questionable as to whether Kim can adhere to them. In fact Reggie demands that Kim conclude her divorce form Kris quickly and quietly. This is looking to be a stumbling block since Kris is attempting to prove in court that he was frauded by Kim – he wants the marriage annulled and pre-nup keeping him muzzled rendered void. Kim definitely wants to comply with Reggie on this condition of a quiet and quick divorce but it won’t be easy.

But wait, here is the best – Reggie insists that Kim give up reality TV!!! Why doesn’t he just ask her to give up breathing? Kim would give up her first born before she would ever agree to quit reality TV. The woman lives to be in the spotlight. She is world’s most disgusting famewhore and if Reggie is serious about these conditions then there will be no marriage resulting form this supposed elopement.