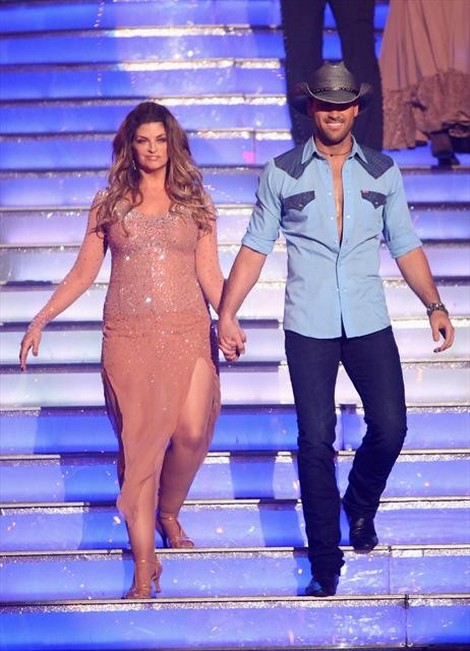 Kirstie Alley danced a Quickstep/Samba Fusion, on Dancing with the Stars: All-Stars performance show tonight.  She danced his Quickstep/Samba to “Sir Duke” by Stevie Wonder.  All the the seven remaining couples will performed a fusion dance that was chosen by their competitors on last week’s show. If you missed the show, we recapped tonight’s show for you and if you want to see how all the couples did go HERE!

Kirstie Alley and professional dancer Maxim Chmerkovskiy  dancing a Quickstep/Samba Fusion routine.  After practicing her Quickstep/Samba Kistie tweeted, “I LOVE doing DWTS. It lets the baby boomers know we can push on. And it let’s young people know they can achieve anything!.. win win..xxo.”

Judges’ Comments:  Len: “I thought it was a nice mix the Quickstep had go and the Samba was so so, admirable effort, well done!” Bruno: “Technique apart, whatever you do is always good.  That was brilliant, only you can change Cinderella into a stripper.  The quick step was good but you lost it in the Samba.  Always great to watch you!”  Carrie Ann: “You know what this is hard because you are so pure and so wonderful.  But, you lost yourself in that second half of that dance.  The Quickstep was nice, but Samba fell apart.”

Watch the video below and let us know what you think? Do you think Kirstie did enough to avoid elimination next week? Sound out in the comments below!