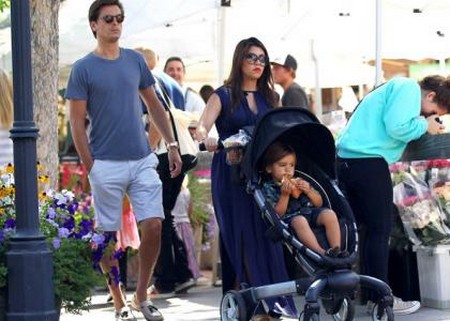 We all got our answers on Saturday as to whether or not there was a new bundle of joy for Kourtney Kardashian and long time boyfriend Scott Disick. The answer is no.

Kourtney and Scott And their son Mason were seen Saturday doing some shopping at the Calabasas Farmers Market. The group stopped by a shop to get some fresh pastries and then headed over to the Coffee Bean to get a drink.

They were all headed for a fun day at a petting zoo but they got some bad news as it was already closed for the day. I’m sure Mason would have had a blast. He didn’t seem to sad about the change in plans he was staying busy playing on his Ipad. Maybe he was watching Keeping Up With The Kardashians – if so, then God help the tot!

Kourtney looked very beautiful in a blue Maximum dress and some sandals. She appears to be close to the end of her pregnancy. She looks like she could have the couple’s second child at any minute. It Looks like all the rumors about Kourtney and Scott calling it quits are not true for now.

It has been said lately Kourtney was furious with Scott for partying with her sister Kim Kardashian. She told Kim to find a new drinking partner on without a pregnant girlfriend at home and a two year old son. We have seen before how Scotts partying ways became a problem and he would get way out of hand. I hope he finally got his life together for Masons sake.