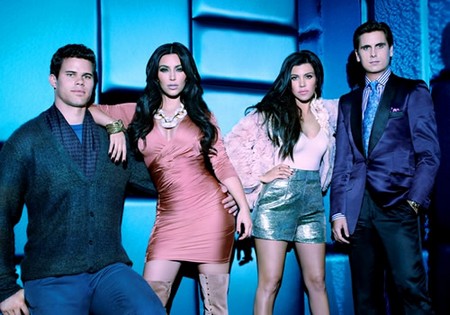 Last night was a double header episode with episode 6 & 7 airing of the second season of Kourtney and Kim Take New York and we recapped it.  After watching the show it is clear that the Kardashian Krew are trying to make Kris look bad, but they are failing.  In our wrap-up of the show we have some observations and some questions.

My first observation/question has to be does Kim Kardashian know where Canada is?  She must have complained 10 times that Kris had gone to another country.  She made it sound like he was on the other side of the world when he was only about 700 miles away. A scant 1.5 hour plane ride.  What a moron!  Much closer than Dubai where Kim went without Kris.

Is it just me or is it stupid to see grown women playing obnoxious pranks on their brother-in-law to get his attention?  They allude to the fact that Kris is dumb, yet he understood exactly what they were doing and was having none of it.  At one point he said, ‘I don’t have time for this.’

When they went to Toronto, Scott got wasted and Kris had to take care of him and be the responsible adult.  Scott behaved so badly he urinated in a garbage bucket, kicked it over, wanted to get on a police officer’s horse and complained none stop about Kourtney.  However, when the ladies got home Scott was forgiven and Kris was the villain.  Scott seems like a real douchbag, don’t be surprised if Kourtney is the next Kardashian to dump her man.  What do you think of Scott?

Once of the funniest scene was when Kim was ranting at Kris for going to Toronto and she told him I found out on twitter where you were and he replied, ‘Stop stalking me on twitter.’ LOL

If the girls are repulsive we know who they take after, momma Kris.  Kim and Kris were in Dubai and they were riding camels and Kris thought it was funny to keep joking.  No class at all.  What do you think of Momma Kris?

When Kim was in Dubai the interviewer asked her if she would bring her husband with her next time.  Kim totally avoided the question, no wonder they divorced?

It has been clear for many episodes that Khloe does not like Kris but she pretends she wants to get to know him.  She asks Kris personal questions about his marriage and he does not answer her.  She gets pissed off.   Do you think Khloe is out of line?

The show is clearly scripted and being editing to make Kris look bad.  The funny thing is, it is failing.  Kris looks like the only rational grown up person in the bunch.   Kris expresses complete disgust and disdain for Kim’s sisters because their behavior is contentious.  They act like the spoiled,  mindless rich bitches they are.  Kris’ reaction to being stuck with them is what any normal persons would be.

Let us know what you thought about the episode?  Sound out in the comments below!   Stop by next week for our next recap!