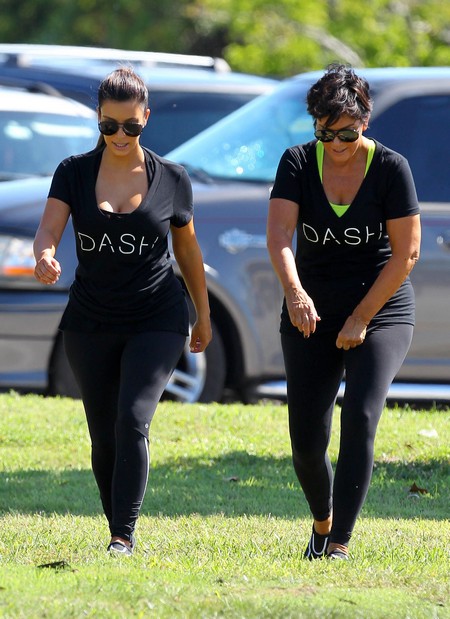 We know Kris Jenner as the matriarch of the Kardashian and Jenner empire. She is the momager to be reckoned with (Kris actually trademarked the word momager). Kris can make anything happen for her clients (family). For example when her daughter Khloe Kardashian–Odom was negotiating to be a hostess for X-Factor and it looked like the deal would fall through Kris stepped in to get the deal done. Now her no talent daughter is making a fool of herself on TV winging what she will say because she can’t read a teleprompter and letting her boobs hang out. Why hire Khloe? Her fame and her cleavage will hopefully pull in viewers. The only thing this family has to offer is their fame and skin. The Kardashian and Jenner women are known for modeling wearing skimpy clothing or in one daughter’s case no clothes at all. No one cashes in on fame better than Kris.

Kris is considered by some to be a role model. The person who worships her the most is Kris’ second daughter Kim Kardashian Thomas Humphries soon to be West. Of course Kim worships her mother. It’s no secret that Kim is Kris’ favorite daughter. The family has argued about the lack of attention they get from their momager, and her son Rob Kardashian has never had his mother’s support for his projects. This whole mess started when Kris brokered the sale of her daughter’s sex tape. A normal loving mother would help her daughter get the tape out of circulation, but Kris had an evil plan for years to make her family famous. She finally found the vehicle. What is more disturbing is that Kim went along with it! Soon their TV show Keeping Up With The Kardashians would be in development.

This is where we really get to see Kris in action. We also get to see the depth of Kim’s fakeness and her willingness to go along with her mother’s plans for fame. Kris tells Kim she got a call from Playboy asking Kim to be the cover girl for their celebrity issue. Kim says no, especially since the sex tape scandal happened and what would people think of her doing Playboy? Kris is very persuasive and Kim does the shoot. I can’t help but wonder if Kim admires her mom or if Kris is a Svengali. Look at all the nude shoots Kim did following the Playboy project, after protesting it would cause her to have a bad image.

Kris and Kim have the same work ethic and that makes for a beautiful partnership made in fame-whore heaven. Kim has been known to put aside personal time with her boyfriend to work. On their show we see this ruin Kim’s relationship with boyfriend Reggie Bush and then her husband Kris Humphries. Speaking of relationships, Kris has influenced Kim in this area, too. Both are divorced and soon to be divorced for a second time. They put themselves above any of their relationships, including family. I would love to see Kris in a real life situation of the movie Role Models. Those kids would kick her butt! And if Jane Lynch got her hands on Kris she would beg to go to jail rather than be a tall to a small.