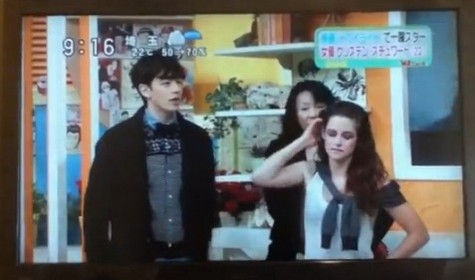 It doesn’t take much to be big in Japan. In fact, even if you’re an outdated and washed out actor in Hollywood, your career in Japan will still be larger than life. If you’re Kristen Stewart, well then, why not just charm the pants off the lovely Japanese? During a recent interview on a Japanese talk show, the elegantly dressed (psst, it was so 1999!) Stewart appeared to charm the Japanese with her salacious sex appeal and hand-beneath-chin gestures.

Stewart doesn’t only charm Japanese men in her spare time, she also likes long walks on the beach, hanging out with friends, and vying desperately for the attention of her scorned ex. She has been charming men (and women) ever since her first appearance on a film screen, as Jodie Foster’s hysterical kid in Panic Room. However, Stewart’s big break came in the Twilight franchise, where the scorned ingénue fought for survival among vampires, werewolves, sparkly faces, and Taylor Lautner’s abdomen.

It wasn’t long before Hollywood recognized her “talent” and pushed her into the young Hollywood boundary of sex appeal vs. acting abilities. She has been heavily criticized for her performance in Twilight, with several critics referring to her as stoic, dried up, and emotionless. Unfortunately, this blunted actress’ claim to universal fame was not her film career, but her recent cheating scandal with Rupert Sanders.

Words such as these – shame, oh my God, bitch – became prevalent on the internet and blogosphere. People were pissed off. She hurt Edward! How could she? She could, and she did. The trampire didn’t stop there! No, she tried her utmost best to make up for what she did and yearned for Robert Pattinson’s attention. Only recently, with the imminent release of Breaking Dawn Part 2, did Stewart and Pattinson come full circle during an alleged reconciliation.

We’ll say it again; it doesn’t take much to be big in Japan. Kristen might be at the pinnacle of her career, but fame is fleeting. It’s great that Stewart is starting to build up relations with the Japanese; she might need them one day when her career is a sizzling carcass in the wasteland of fame.