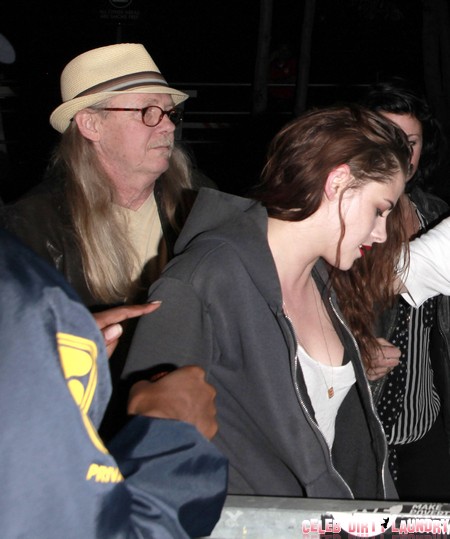 It looks like even if those reunion rumors are true, Kristen Stewart and Robert Pattinson both are making sure that their individual lives continue as well. The formerly connected at the hip couple is clearly taking a different approach this time around. Kristen attended the Florence and the Machine concert on Sunday night at the Hollywood Bowl and rather than bring Rob she decided to bring her dad, John Stewart, along as her date.

We’ve heard that Kristen begged Rob to take her back and is pushing hard for a winter elopement. It seems the guilt after screwing a married man has given her the incentive to tie the knot- something she was nowhere near ready to do before they split in July.  While she is attempting to throw herself head first into a reconciliation Rob is wisely, not fully trusting the sourpuss. As we reported at Celeb Dirty Laundry it’s actually Kristen’s mother who is spearheading this reconciliation.

“Jules is the glue that’s keeping Kristen and Rob together. It ripped her heart in two when she saw those pictures of Kristen in a compromising situation with Rupert — and she couldn’t believe what her daughter had done.  As far as Jules was concerned, Kristen’s relationship with Robert was a match made in heaven and she adored him like he was her own son. At first, she struggled to understand why Kristen wanted to cheat on him. But Kristen’s young and Jules knows mistakes will happen — so she supported her daughter’s efforts to win Robert back.”

We’ve also seen photos of Rob out, happily bar hopping with friends. Do you think he’s better off without her and more importantly, do you think Rob will realize it and give her the boot for good?  Do you think Kristen originally hoped that Rob would join her at the Florence concert?  Is it a sign that things are still pretty shaky between them? Tell us your thoughts in the comments below!

Twilight’ actress Kristen Stewart and her father John arriving for the Florence And The Machine concert at the Hollywood Bowl in Hollywood, California on October 7, 2012. The pair were accompanied by a friend who tried to shield Kristen from the photographers. Kristen was wearing a pair of really short cut off jean shorts and a hoodie with the logo ‘Nuns With Guns, Praise The Lord And Pass The Ammunition’ on the back. Kristen is trying to get in some quality time with her father who is getting a divorce from her mother Jules.