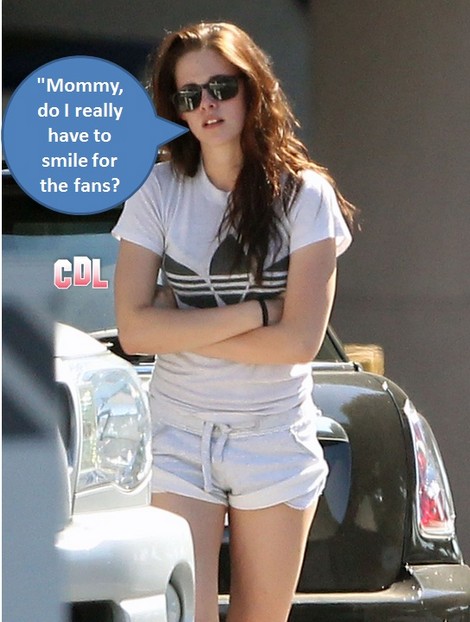 In the Kristen Stewart and Robert Pattinson betrayal saga, thousands of fans have been left hurt, angry, and betrayed. Perhaps even more so than Robert Pattinson. After Kristen’s secret relationship with Snow White and the Huntsman director Rupert Sanders leaked, Robert flew like a bat out of hell (or a rogue vampire out of Volturra) and reportedly hasn’t talked to Kristen since. But now, at the start of the Toronto International Film Festival—where she’ll be promoting On The Road—career coach Roy Cohen offers Kristen some free advice.

“Kristen should attend the premiere of On The Road with her mother. This would suggest that there is some stability in her life. Bringing her mom says, ‘Kristen is still a young girl.’ It also says, ‘Kristen is getting support and direction from her family.’ This would be a powerful impression builder.”

Of course, grabbing for mom’s elbow and playing the young, naïve, and impressionable role will do little to impress Robert, but young fans may very well bite the apple. (Get it? Apple?)

As for dishing the dirty deets, Roy advises, “While on the red carpet, Kristen should avoid answering personal questions about Rob and the affair. She can respond by saying, ‘I appreciate your concern, but now is not the right time to talk about my personal life. I am here to celebrate On The Road and the Toronto Film Festival.’ Kristen must be respectful and keep redirecting the conversation back to the film.”

Roy encourages Kristen to get help from a professional consultant before her red carpet strut, as this appearance will be crucial to rebuilding her shattered reputation as home wrecking hussy.

Perhaps this consultant will take the time to teach her how to contort her face muscles into smiles, frowns, and brow furrows? I’m not counting on it, but a meets-the-eyes smile would help the “I’m a nice, young girl” image!

Roy finishes, stressing, “It’s important that Kristen acts humble and appreciative at the premiere. She should not behave like a rebellious teenager who is bored or uncomfortable in her own skin. If she’s looking for her audience to fall back in love with her, she needs to warm it up and make her fans feel like she cares about them.”

What do you think? Kristen Stewart in Toronto at the film festival will find that she receives more attention than she ever has before – and that is a crazy amount of attention! Is Kristen Stewart too far gone, or can she redeem herself? Is it too late for her to drag her emotionless body out from under a rock, wash her hair, and beg for forgiveness?