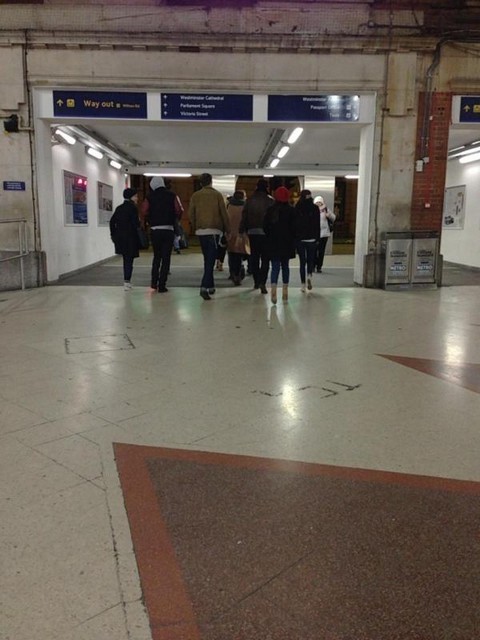 Robert Pattinson and Kristen Stewart are in London for New Year’s Eve. Why? We don’t know. We presume Stewart jumped on her broomstick and cackled into the dark, black night like a witch from Eastwick, so Pattinson gave in and told his tormentor to join him in the London cold when the clock strikes zero.

They were spotted exiting the Tube with an entourage of fame whores, and chatted and walked and chatted and looked cool – almost like a group of hooligans on their way to shoot zombies. Amber Johnson, a Twitter user wrote, “Just sat next to Robert pattinson and christen Stewart on the tube oh my god. [sic]” And Amber died inside a little bit. We would have died. Seriously, we would have jumped up and screamed and tossed our cookies. It’s not every day that you sit on a subway listening to an obscure 90’s indie band, chewing bubblegum, smiling at yourself in the reflection, and as quickly as one, two, Bruce Jenner, the biggest power couple in Hollywood joins you. That’s like having one of those darn dreams where you’re naked on a football field. Amber replied to another Twitter user – who presumably wanted the whole dish and nothing but the dish –  “we got off at London Victoria and was standing in between them two in the escalators she was with her American pals. [sic]”

We must say, although Stewart and Pattinson had one of the worst years of their life, they were able to pick up their bag of chips and join the poker game before it was too late. They look happy for the first time in their miserable relationship. We just hope and pray that 2013 won’t see Stewart eating from the salad garden of another male film director – really, we won’t be able to handle it. Our fingers and keyboards were victims of the Rupert Sanders scandal, so God only knows which limbs we might lose when she saddles up with a new lover in 2013…