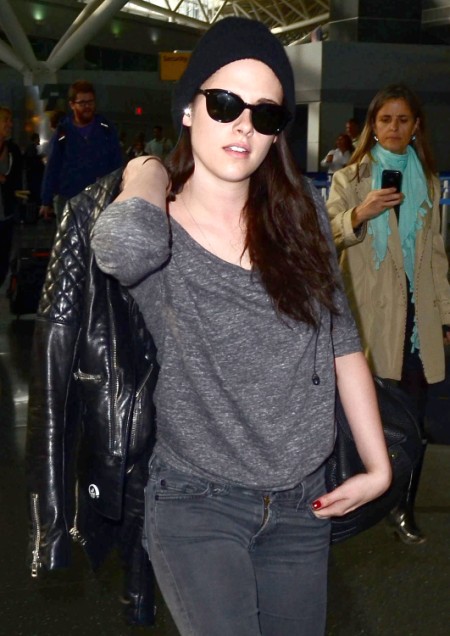 Kristen Stewart has got to be biting that lower lip in frustration over all the interviews she gave right before the cheating scandal erupted all up in her face. Here she is on the UK Vogue cover and naturally the title is “Kristen Stewart on Love and Living Dangerously”. The interview and photo shoot took place before her “momentary indiscretion” went down but, of course, the newspapers and magazines are going to frame her words in context with her break up with Robert Pattinson. But it’s not like her habit of mouthing off and saying whatever comes into her too cool for school mind didn’t make their job easier. Right before the scandal, Kristen made numerous comments that looking back seem like she was trying to get caught.

For instance, in Elle magazine’s June issue she said, “I feel boring. I feel like, Why is everything so easy for me? I can’t wait for something crazy to f-cking happen to me. Just life. I want someone to f-ck me over! Do you know what I mean?” Was she trying to tell us something? And in May she told UK magazine, Little White Lies: “But I like to be scared. I love to suddenly feel out of control.”

I wonder what gems she’ll give us in the Vogue story. It really doesn’t matter what she says. If she talks about love or “living dangerously” as it relates to her movie, On the Road (which has a lot to do with both), it will be turned around to focus on her fledgling relationship with Rob. Is that fair? No but it’s the nature of the beast. And it’s not like it hurts Kristen that much. It will sell magazines and increase the movie’s exposure. It won’t help her image, but that’s f-cked right now anyway, so she should just take the positives where she can and work on her image later!