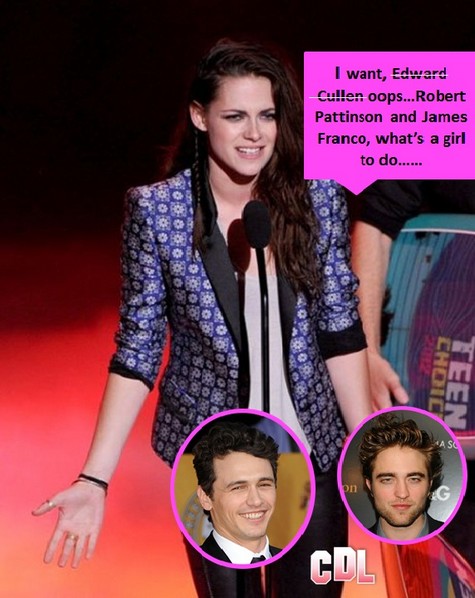 For months now we’ve all been speculating about Kristen Stewart’s sex life. Why did she hook up with Ruper Sanders? Did they really have sex and if so did she stray because Rob Pattinson sucks in the sack?  The media has ripped her apart and sewn her back together with the scowl still on her face, but little has been said from Rob himself.  Now that he’s rumored to be attempting reconciliation with the skank, we’re learning a bit more about what gets his juices flowing. In a recent interview with IAK Magazine Rob was asked about an actor that he really looks up to and his response made fans do a double take, “James Franco. He’s intriguing in everything he does,” Rob enthused, “and he seems to have so many interests that he never does the same things.”

“Surely something like Fifty Shades of Grey. I would really like to do that and invert the roles: making the woman the one who punishes the man. It’d be so much fun. Something like Misery, but really he loves to be in that situation.”

I have to tell you, I’m kinda happy to hear that Rob has a wilder side and I have to wonder if the role of a punished man is one that he happens to enjoy himself! Could part of his next punishment include watching his favorite sour puss hook up with James Franco? Tell us your thoughts in the comments below!