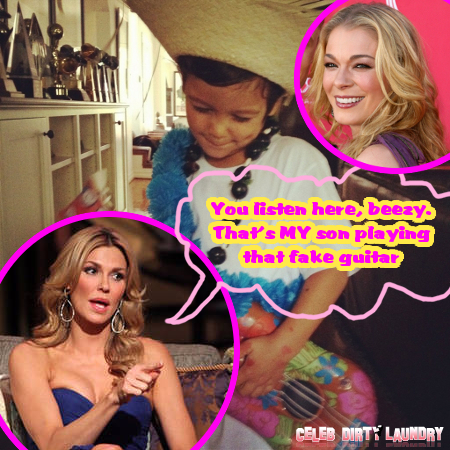 LeAnn Rimes recently said she was scared of Brandi and that she thought Brandi’s deep hatred might turn into violence . . . and that she feared for her life. Brandi has let it be known how she feels about the country music star.

LeAnn stole Brandi’s husband right out from under her nose. The singer threw salt on an open wound by also saying she wasn’t sorry for the affair — the affair that ended both the womens’ marriages.

Not long after that, LeAnn married Brandi’s ex husband. They are still married and today they’re happy. Brandi was not too happy that her ex husband Eddie Cibrian wouldn’t allow her children to be filmed on the Real Housewives of Beverly Hills show. She blames Rimes for a lot of things, including that — which I find to be a completely legitimate decision. Not every child belongs on TV, and perhaps Brandi should respect this decision.

LeAnn recently tweeted a pic of her step son (Brandi’s son) in Hawaiian clothes to Brandi and said “Had to share his luau fabulousness!!!! Mom and he are gonna rock out today. @brandiglanville have Fun!”  The singer heard crickets when Brandi said nothing. Wow, sort of a bitch — but HILARIOUS — move on LeAnn’s part, right?

Let us know what you think of the super awkward Brandi-LeAnn-Eddi love triangle mess in the comments below! I don’t know about you, but if I were Brandi I’d back away with caution . . . because those eyebrows of LeAnn’s are dangerous.