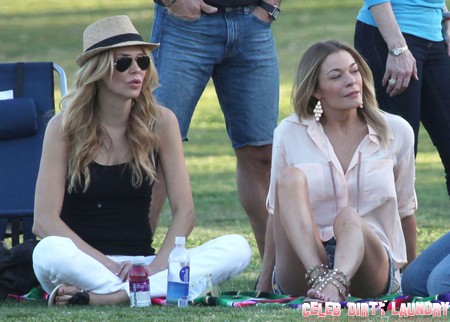 You knew things wouldn’t stay civil for long between Brandi Glanville and the skank that screwed her husband and weaseled her way into her sons’ lives. She did take the high road at first and wished LeAnn Rimes the best upon hearing of her voluntarily committing herself to a treatment center, but as more information has leaked out of LeAnn’s closet Brandi hasn’t been able to keep her mouth shut. If you’re a Real Housewive’s of Beverly Hills fan you know that Brandi is endearing, but neither subtle nor tactful.

LeAnn says cyber-bullying caused her to lose her grip on reality and have an emotional breakdown of epic proportions (NOT her husband, Eddie Cibrian’s bad habit of enjoying a side piece every now and then) and that hasn’t actually sat well with anyone, least of all Brandi. She finally took to her Twitter to post a zinger regarding the whole Twitter-ruined-LeAnn’s-life thing.

“I saw some of the nasty tweets sent to LR they were MEAN but NOTHING compared 2 the ones her paid employees sent me for over 2 yrs.”

KaPow! She could have easily taken a shot at the obvious; her ex husband is likely now screwing around on LeAnn but instead played the game and addressed the twitter nonsense. She then flat out called LeAnn a hypocrite. It is absolutely believable that LeAnn’s people would have attacked Brandi over the years because she had no remorse for hooking up with a married man and taking him away from daily interactions with his children. LeAnn is likely an original “Mean Girl” and all the bad karma has finally grabbed her by the toe.

Do you blame Brandi for taking a shot at LeAnn?  Tell us your thoughts in the comments below!

Couple LeAnn Rimes and Eddie Cibrian cheering on Eddie’s son Jake at his soccer game in Calabasas, California on May 6, 2012. Also in attendance was Eddie’s ex-wife Brandi Glanville and their other son Mason.