Leann Rimes Out With Family After Rehab – The Crumbling Life of a Desperate Woman? 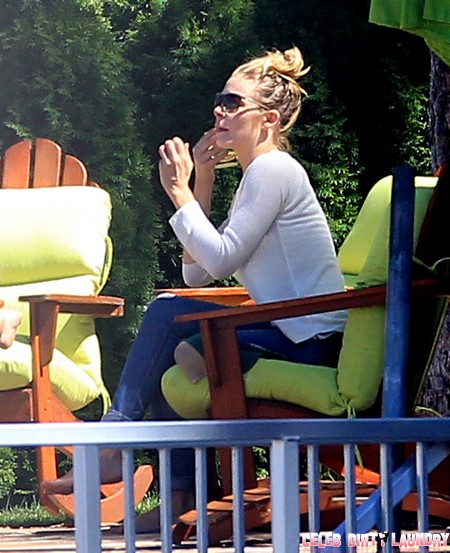 Love her or hate her, Leann Rimes seems like a deeply unhappy person. Last month she checked into a “rehab” center to address issues of self-image and confidence (and also lick her wounds after losing a fight on Twitter). Before that breaking point, we all saw the pictures of her getting thinner and thinner. We heard the rumours that husband Eddie Cibrian was cheating on her, just like Eddie cheated on ex-wife (and mother of his two sons) Brandi Glanville with Leann starring as the other woman. It seems like Leann is finally realizing that she’s built her life on a foundation of lies and is struggling to keep it all together.

We don’t know specifics about what sort of help Leann received while in “rehab,” but the situation looks pretty sketchy. Most people who are truly seeking recovery will use it as a time to cut ties with the outside world and spend months with different therapy appointments, nature walks, and group discussions  – think Amber Portwood from Teen Mom 2, or Demi Lovato, who was self harming and had an eating disorder—they both disappeared from the face of the earth while in rehab!

Leann didn’t stick to the confinement, and left the facility whenever she wanted to, plus she was only in there for two weeks. What could have happened in that time to make a lasting impression? I would guess that in those two weeks, she and a therapist got to the heart of her problem, she freaked out, and ran like a startled dear back to her cheater husband.

It seems likely that she is eager to look happy in public. And I don’t doubt that some of those smiles are genuine. It is possible for deeply unhappy people to have moments of real pleasure. But those moments are probably getting harder to find ever since Brandi Glanville announced that she is publishing a dating / self help book, which will probably be full of personal anecdotes about cheating husbands and skanky new wives. Leann wants to appear like the woman who has it all, and Brandi has always threatened that image. Is this it for Leann, or is another breaking point on its way?